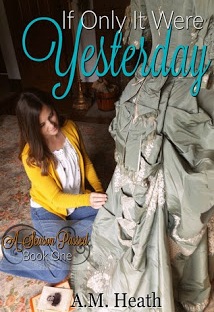 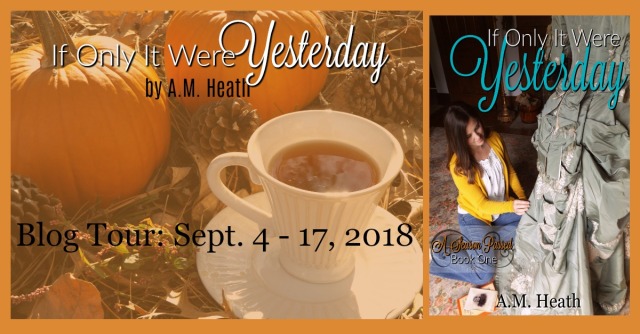 Amazon  Goodreads
A Season Passed #1
Blurb:
“Liz Cooke has two problems in life: Her social media is filled with brewing political conflict and her idea of a perfect man seems to have gone extinct a century ago. Inspired by the contents of an antique trunk, Liz dreams she time-travels to 1885. As she sets out to enjoy the Victorian era in all its glory, armed with knowledge gleaned through historical novels and period dramas, will she find the past to be all that she thought? And does the right man for her exist only in her dreams or has he been in her life all along?Loosely inspired by Alice in Wonderland, A.M. Heath brings you a fun read chock-full of humor and whimsy with a special message for the avid reader in all of us.”

Review:
I received a copy of If Only It Were Yesterday from the author, A.M. Heath.  All opinions expressed are my own.
Whew this was certainly something!  I’ll get into this more later but the romance was by far my favorite part.  Anyone else love getting the warm and fuzzies when they read a romance?  Because I do.
1.  The plot.  The storyline of this installment was particularly engaging.  I haven’t read many time travel novels and I clearly need to read more because they. are. my.  jam.  I will say that I didn’t like how this particular time travel phenomenon was resolved personally because it is a slight cliché and I’m someone who can’t stand open endings (there is the promise of it being resolved in book four but I want it nowwwww).  There are difficulties from a psychological standpoint but I’ll leave that for another day as well.  There was also one plotline involving an interesting mystery involving two of the time travel characters that was never resolved and for me, the person who always has to finish everything, it was a little unsettling.  Excepting those two pieces, the rest is absolutely marvelous.  I read this comfortably in one day which definitely tells you something.  This is one of those books that’s best enjoyed with the heat of a fire, a warm blanket, and a fresh pot of tea (or, in my case, hot chocolate!).  Also a furry friend helps.
2.  The characters.  These were also well done.  I enjoyed getting to know Liz and all her friends both in her current and past worlds.  I found that each character was sufficiently drawn and each had their own distinguishing characteristics that really cemented the inspired retelling (the book is an extremely loose adaptation of Alice in Wonderland) vibes I was getting.  In the beginning, I couldn’t take Liz that seriously just because of her views of the world.  I’m a realist at heart and connecting with someone who is that dug into their fantasy world that they can’t see the realities of the world around them is difficult for me so I couldn’t help but chuckle and feel slightly exasperated as one would at the antics of a small child when her inner thoughts were exposed on the page.  However, because of her starting ignorance, there is a tremendous amount of character growth that happens right in front of our eyes which is breathtaking to watch.
3.  The romance.  Now this is the part we’ve all been waiting for!  Typically, I don’t enjoy romances in books that are centered on something else (as this one is with the historical action and the character growth) but in this novel?  Beautiful.  Every second of the romance captivated me.  I frequently experienced the fuzzy-bunny feeling, as I call it.  It’s such a sweet, slow burn romance that is just adorable to watch.  If nothing else, read this for the romance because it is one of the sweetest things you will ever read.  Honestly, I was so disappointed it ended where it did because I wanted more of the happy couple once they finally gave into each other!  As I’ve experienced in this author’s previous works, relationships are one of her strongest areas.
4.  The world.  For this, I’ll say I did have a stronger sense of place in the present rather than in the past.  There was just a bit more macro in the present and bit more micro in the past.  I’m by no means an expert on the 1800s and their standard of living but from my amateurish perspective, it’s clear the author took care in crafting the micro world of the past. The houses and dresses were described with tantalizing detail which really helped transform the world’s atmosphere.
5.  The religion.  I wanted to add in this section just as a bit of an fyi (although you probably already gathered what I’ll say based on your own intellect).  This book does have copious amounts of religious and conservative undertones (which follows it being classified as Christian Fiction).  I did think it was integrated well and lent itself well to furthering the plotline and the mentality of Liz.  I will say that I couldn’t help but raise an eyebrow at the conservative undertones, however.
The Final Verdict:
A novel with a beautiful and flowering romance within a lively and elegant setting.
4 stars 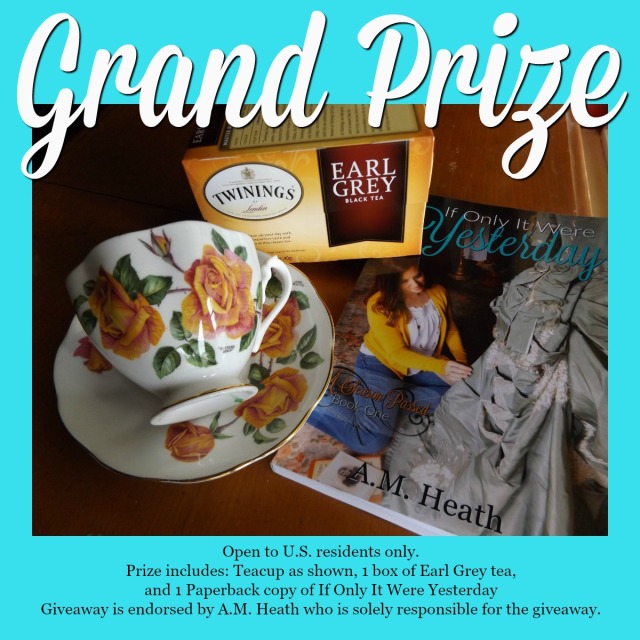 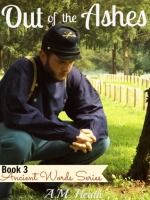 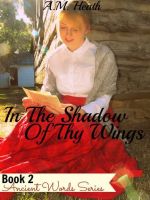 0 thoughts on “Review, Release, and GIVEAWAY Wednesday: If Only It Were Yesterday by A.M. Heath (#1)”