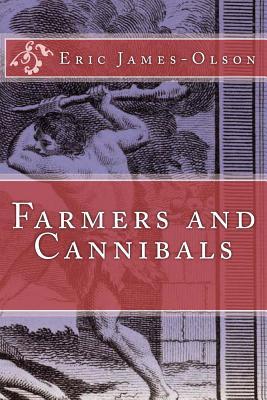 Farmers and Cannibals by Eric James-Olson
Amazon  Goodreads  Book Depository  Barnes and Noble
Blurb:
“Enter the world of Farmers and Cannibals where limited resources, worldwide conflict, and great leaps in weapons technology have cut a deep fissure between those who have taken power, and those that struggle to survive on the margins of civilization. The deadly struggle continues as the dispossessed gather together, as the men and women robbed of their livelihood recognize the inherent power of their numbers. Join Francisco Cain, Director for Security on Farm-Colony 984, as he finds himself in the center of the conflict. Bear witness as this tool for control, as this mechanism for power begins to recognize the hand that subtly controls his every action.”
Review:
I received this from the author, Eric James-Olson, in exchange for an honest review!  I’ve also read and reviewed another book from this series, Just After the Fall.  Read my review HERE.
If my kindle hadn’t broken, I probably would have read this one all in one night it was so good!  The plot, the characters, everything was just marvelous.
So.  I loved Cain.  His mind was just a fascinating place to be!  And that part at the end.  THAT was unforgettable my friends!
While we’re on the topic of the ending, let me just say I loved how all the politics played into it and the big explanation.  It was so elaborate and cunning and so exactly like something that could happen (sadly).
As I said above, I’ve also read another book in the series – Just After the Fall.  This book filled it SO much that I was wondering about.  It says in the blurb that they can be read separately but it helped me a lot to have a bit of background on the whole drone thing and such.
The only reason this is 4 stars instead of 4.5 or maybe even 5 is because it did drag a bit in the middle/end of the beginning.  The end is where it really picks up so if you are bored with the beginning, hang in there!
The Final Verdict:
An amazing plot, characters, and ending had me totally engrossed.  It did drag a bit in the middle section.
4 stars