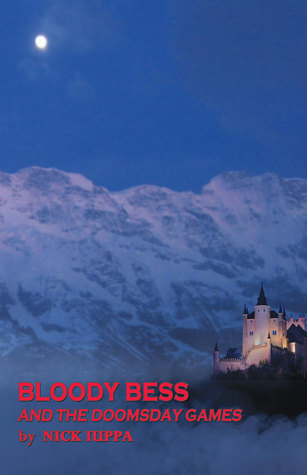 Amazon  Goodreads  Book Depository  Barnes and Noble
Goodreads Blurb:
“The castle of 15th century duchess Elizabeth Laskaar looks down on the little Swiss village of Murdenwald and the secretive military complex nearby. There, the UN hopes to end world conflict with a vast military simulation that will dramatize the apocalypse that will follow the next major war. To head the project, they hire notorious Hollywood producer Donald Vito, master of explosive action adventures, who still mourns the murder of his teenage love in the 1950s.

Vito and the simulation team use new technology to build hundreds of virtual soldiers and terrorists you can touch, speak to, and reason with. But they also begin to feel the influence of Elizabeth Laskaar. She’s often called Bloody Bess – the first real vampire – because she maintained her youthful beauty by slaughtering her maidservants and bathing in their blood.Recklessly inspired by their surroundings, the team creates a virtual vampire that soon takes on the characteristics of Elizabeth’s magnificent, long-dead husband. Soon, he and Bess stalk the compound, seducing everyone working on the project, until vampire blood surges beyond the humans to the virtual characters with unthinkable consequences. In the end, perhaps, only the power of Vito’s long lost love can save humanity.”

Review:
Thank you to the author, Nick Iuppa, for gifting me with a free copy of this book in exchange for an honest review!
As a side note before I begin, I feel like all I’ve been doing these past few weeks is rating books 3.5 stars.  That is totally not intentional… I don’t know what is happening anymore…  I don’t know.  Anyway!  Back to the review!
There was a pretty much even split between the amazing things and the not-so-amazing things.  However, I give the author props for style!
Overall, this was a very compelling read and I didn’t want to put it down!  I needed to know how it all ended!  I also really liked how Mr. Iuppa put a different spin on the vampire idea.  It wasn’t just modern vampires, it was really old ones and virtual ones and all that jazz.  I don’t want to ruin it for you all so I’ll leave it at that!  Everything did seem a bit unconnected at the beginning.  Like there were these random stories about Vito and his girlfriend and then these old vampires in a castle crypt thing and then all of a sudden they were talking about the UN.  So it was a bit confusing and I didn’t really know what to expect or where it was all going.  I’d like to say it all turned out amazing in the end, but I still don’t think all of those elements melded perfectly together.
So some of the not-so-amazing stuff.  I did think it was a bit overboard on the explicit language.  One of the characters was said to be hot-tempered and that was just part of his character, but all of the other characters seemed to swear quite a lot.  Also, they seemed to accept that the virtual vampires could turn into real ones and there were real ones already living.  The entire team was just like ‘we have to stop these vampires!’.  All the while, I’m sitting in my reading chair all confused that they’d accept it so easily.  When it was mentioned at the end that they had to cover it up, that made more sense because, let’s face it, the general public would panic if vampires were suddenly real (or maybe they’d think it’s all one big hoax and they’re all crazy??).
Also, just a warning, if you don’t like books with a substantial amount of sexual content, I’d sit this one out.  In almost every chapter, there were sexual comments (mostly towards women).
The Final Verdict:
All in all, a very compelling read although I had a bit of a reality check when it was revealed that the virtual vampires were suddenly half-real and they were just on a vampire hunt.  I did like the different spin on the whole vampire topic.  There is quite a bit of sexual content for those who don’t like that sort of thing.
3.5 stars