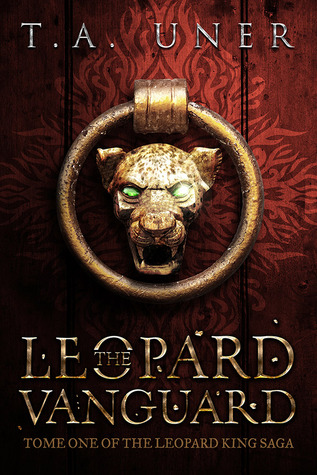 Amazon  Goodreads  Book Depository  Barnes and Noble
Goodreads Blurb:
“Set during the early years of the reign of the Mad Emperor Caligula,this first installment of the Leopard King Saga introduces us to Tullus, a gifted Roman Centurion who resigns his elite position in the Praetorian Guard to join a troupe of circus performers and learn more about his hidden magical talents. Along with his new partner, a magical Leopardess named Celestra, he re-invents himself as The Leopard King, the most famous entertainer in all the Roman Empire. But when Tullus’ friend and Circus Ringmaster, Paullus Gabinius, is killed, Tullus and Celestra find themselves immersed in political intrigue and up against Paullus’ killers. Their struggle to avenge Paullus will also cause them to cross paths with corrupt Roman politicians, who know Paullus’ deadly secret-which has the power to destroy the Roman Empire.”

Review:
Thank you to the author, T.A. Uner, for gifting me with a copy of The Leopard Vanguard in exchange for an honest review!
Now, I’m not exactly an expert on Rome but from what I do know, this was a pretty darn accurate portrayal of Rome back in the day.  And from the dozens of research papers I’ve written, I know how difficult it can be to make something completely historically accurate.  So for all historical writers, a round of applause!
So the review.  I’ve always been a huge fan of historical fiction and this book is no exception.  The politics and blackmail kept the story-line twisting and turning and the added magical element kept me wondering what exactly it was all building up to.  Overall, I felt like the magic could have incorporated more but it still assisted the story.
I also loved Tullus’ sense of justice.  He’s a true Roman warrior and doesn’t get sucked into the power cycle.  He stays true to himself and his friends/people.  Going along with that, Celestra was amazing as well.  It added such a different aspect into the story that I haven’t seen in many other books.
There were a couple of things that caught my attention that kept this from becoming a 5 star book.  One, some chapters seemed like they were a bit too convenient (for example when Eliana becomes aware of the merchants predicament).  It felt like a very short and plain bridge to where the author wanted to go so I think that could have been developed a bit more.  Also, Paullus’ ‘secret’ became a bit muddled at the end and I was kind of confused as to what exactly it was.  I had an idea… perhaps that will be remedied in the sequel which I will be reading!
The Final Verdict:
A very good novel with amazing elements of blackmail, politics, and perfect characters.  Sometimes, the plot was a bit too convenient and Paullus’ ‘secret’ was a bit muddled near the end.
4 stars
The Ultimate Quote:
“Every day you live is a lesson in itself.”