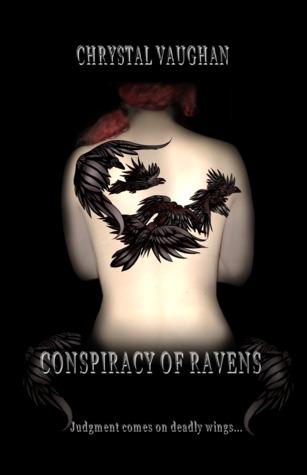 Amazon  Goodreads  Book Depository  Barnes and Noble
Goodreads Blurb:
“Sophia Pascale is a rising star at the Philly Herald. Her latest assignment sends her to the Philadelphia State Penitentiary to interview the “Raven Witch Killer,” a self-proclaimed serial killer who is willing to talk…to the right people. Sophia gets more than she bargained for when she steps foot into the prison; Catherine Meara is more than she appears and the handsome Officer Shaw is a wrinkle in Sophia’s plans she didn’t count on.

Struggling with her past, her beliefs, and her desire, Sophia will be tested by her ordeal in the prison in more ways than one. She confronts her inner demons and the very real ones embodied in the black shapes perched above the prison entrance…and etched into the skin of her enemy. Will Sophia find true love and launch the story of her career? Or will she be yet another victim of the “Raven Witch Killer”?”

Review:
Thank you to the author, Chrystal Vaughan, for gifting me with a copy of Conspiracy of Ravens in exchange for an honest review!
I read this the week of Halloween and it was perfect!  It’s the perfect mix of creepy and paranormal and magic for Halloween.  It’s a truly beautifully written book stuffed with symbols and hidden meanings.  I was addicted from the first page!
The idea for this book is so different and unique.  It could have easily failed but the author executed it perfectly with enough balance between the elements.  I also loved how it felt (I know that sounds really weird…).  I feel like this could actually happen.  And that ending just wrapped it up so well and cemented it in my mind.
Literally, the only thing I wished was different was Sophia.  I just wish there was a bit more background on her.  Catherine kept hinting at her past and that was awesome… but then there wasn’t really an in depth explanation.  Especially her childhood.  So I guess just a bit more introduction.
The Final Verdict:
Quite frankly, a beautifully written book with a truly unique premise and execution.  However, a bit more introduction to Sophia’s character would have made it better.
4.5 stars
Interview:
1.  Where did you find the inspiration to write Conspiracy of Ravens?
~ The inspiration came from a conversation with one of my daughters about the different names for groups of animals. For some reason, Conspiracy of Ravens just stuck and seemed to need to be a book title.
2.  Was publishing Conspiracy of Ravens easier after publishing your other books (Sideshow and Dead in the Water)?
~  Publishing Conspiracy of Ravens and publishing Dead in the Water were similar because they are both represented by Solstice Publishing. Sideshow was the hardest book to publish because it was my first book, and I published it myself.
3.  If being an author didn’t work out, what would your career be?
~ I would be an English teacher. That’s my backup plan!
4.  Conspiracy of Ravens deals with everyone’s inner demons and learning to face them.  Did you have to base your writing on any experiences of your own to write an authentic book?
~ Every book I write–and I suspect this is true for other authors–draws upon my own experiences to some extent. While I haven’t dealt with the paranormal elements in the book, some of Sophia’s struggles and some of Catherine’s inner demons reflect my own.
5.  Do you try to write everyday (be it relevant or random things) or just when inspiration hits you?
~ I’ve tried writing on my various novels in progress on a schedule, but the writing suffers if I’m not inspired. I do write every day, whether it’s a poem, a blog, a book review, or etc. but I may not write novel words every day. Fortunately, I’m writing several different projects so there is usually something to be inspired by.
6.  Do you write in silence or do you try to find songs that fit the scene you are writing to get in the mood?
~ I can’t write with music on, it’s too distracting. I can write with the background noises of my family, at the public pool, in a coffee shop, with the television on…anything but music. Many people don’t know this about me, but I learned to play the classical violin when I was nine and played for over twenty years. I could probably still pick up the violin and play something! It changed how I listen to music though, and I find myself unable to do anything else when I’m listening to music.
7.  Do you prefer to type or hand-write?
~ I use to type all of my books, and the first two were typed. Conspiracy of Ravens was the first book I wrote by hand and I really enjoyed doing it that way, so I have several works in progress that are being handwritten. I have to finish the ones I started typing in the same manner, however, so there are several things I’m still typing. Overall, I think I prefer handwritten over typed.
8.  Do you base any of your characters or the like on your own life?
~ Absolutely. My second book, Dead in the Water, is based on several of my students (I work at a local high school). Conspiracy of Ravens features a red haired woman of great beauty who is the serial killer; she’s based on my best friend Kymri, who is not a serial killer, for the record.
9.  What is your favorite genre to read and/or write?  Why?
~ I really enjoy writing paranormal horror and I guess that’s my favorite genre to read too. I like to be scared a little and I like to scare others. I read everything though: historical, romance, literary fiction, non-fiction…cereal boxes. I will literally read anything.