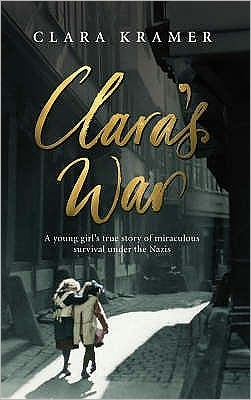 Amazon  Goodreads  Book Depository  Barnes and Noble
Goodreads Blurb:
“On 21 July 1942 the Nazis invaded Poland. In the small town of Zolkiew, life for Jewish 15-year-old Clara Kramer was never to be the same again. While those around her were either slaughtered or transported, Clara and her family hid perilously in a hand-dug cellar. Living above and protecting them were the Becks.

Mr Beck was a womaniser, a drunkard and a self-professed anti-Semite, yet he risked his life throughout the war to keep his charges safe. Nevertheless, life with Mr Beck was far from predictable. From the house catching fire, to Beck’s affair with Clara’s cousin, to the nightly SS drinking sessions in the room just above, Clara’s War transports you into the dark, cramped bunker, and sits you next to the families as they hold their breath time and again.Sixty years later, Clara Kramer has created a memoir that is lyrical, dramatic and heartbreakingly compelling. Despite the worst of circumstances, this is a story full of hope and survival, courage and love.”

Review:
This is one of those books I hesitate to rate.  I mean, the author is just telling what happened to her and her side of the Holocaust and WWII.  I was thinking about doing a discussion post and even started writing one, but then I couldn’t think of anything to say.  I mean, all I could think of was ‘the Holocaust was bad’ and ‘this book definitely portrays that’.  Which isn’t much of a discussion post at all.  So I’ve resigned myself to a review in the hopes I can emphasize enough that no matter how good the writing is, I think everyone should read some account of the Holocaust and know just how horrible and inhuman it was.
That being said, this was such an emotional book for me.  I was crying and laughing and gasping right along with the story.  It gripped me and wouldn’t let me go.  Like I said, I feel like I can’t really critique this book.   To that effect however, it wasn’t the best writing I’ve seen but it was one of the most beautifully executed.  It was, quite simply, a terror-wrought, hopeful account of the Holocaust from the standpoint of someone who had hidden away and lived in fear of being discovered.
The Final Verdict:
This is such an incredible, heart-wrenching story.  Utterly compelling and devastating to read but completely necessary.  I would definitely recommend this to anyone as everyone should know what exactly it was like for these people.
4.5 stars
Quotes:
“There are people who are simply gifts to everyone they meet.”
“I now knew there was no such thing as a broken heart. It will go on beating to taunt you and mock you and tell you that even in grief it is indestructible and full of love.”
“They don’t understand because they don’t have a heart”
“We are all in God’s hands”
“I abandon them, I abandon my honour”