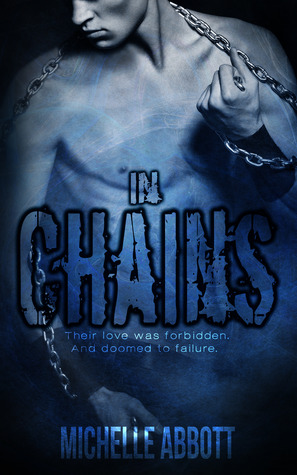 Amazon  Goodreads  Book Depository
Goodreads Blurb:
“A romance set in a world where slavery is government run and slaves are fitted with microchips.

Savannah, fleeing a turbulent relationship, seeks solace at her brother’s country farmhouse. It’s there that she meets Kayden; her brother’s slave who’s considered less than human. These two damaged souls form an unbreakable bond, one that’s about to be tested, because Kayden is her brother’s property and he will stop at nothing to keep them apart.Please note this book contains some sexual scenes, violence and strong language.”

Review:
Thank you to the author, Michelle Abbott, for gifting me with a copy of In Chains in exchange for an honest review.
This is one of those books that I’m just not sure what to rate it.  I decided to go with 4 stars because it was a good solid book with a good plot, decent world-building, and very fast, addictive pace.  Just let it be known, this kind of book isn’t for everyone.
I only had one complaint about this book but it’s a rather large issue in my eyes which is why it’s worth a whole star to me.  World-building.  This is, if not the most important, one of the most important factors in whether or not a book is excellent or just good.  While I was reading, I didn’t really understand what world I was in.  Modern day world where things turned out a bit differently?  In the future where this may come to pass?  In a completely different world than our own?  I really have no idea which left me kind of disoriented throughout the book.  Perhaps it will be remedied in the next book.
Other than that minor (well kind of major) glitch, everything was spot on.
Overall, this was such a compelling book.  I settled down on the couch one Saturday to read some R&R’s and I couldn’t put this one down!  Not even to eat lunch or go get some water or something.  I needed to know how it ended it was that suspenseful.  To that effect, it was a very intense love story that at first bordered on insta-love but as you get further in, it’s anything but.
The author did a very good job of separating the two voices of Savannah and Kayden.  I’ve seen slightly better although this author had it harder, having to portray the truth about Kayden and whether or not the ‘Neanderthal’ gene truly affects him or not as the government says.
The Final Verdict:
All in all, a well done book although the world-building leaves something to be desired.  It was very addictive, suspenseful, intense, and intriguing!
4 stars
Quotes:
Again, because I’m so organized, I neglected to highlight my favorite quotes so I’ll be going back and reading this book again to find the quotes.  I’ll update this when I find them all!

0 thoughts on “R&R Review Tuesday: In Chains by Michelle Abbott”