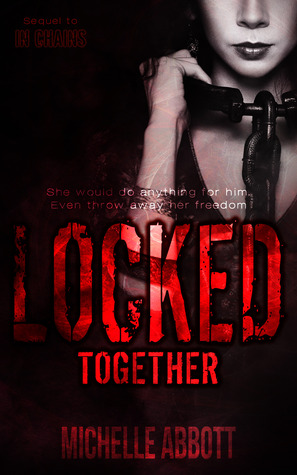 Amazon  Goodreads  Book Depository
Goodreads Blurb:
For Savannah, it was an easy choice; getting sent to the Compound meant she and Kayden could be together. But nothing is ever that simple. Caught in a system that encourages cruelty and mind games; will their love survive?This is book two in the In Chains series and continues the story of Kayden and Savannah. I would recommend reading book one first as this is not a standalone. Please note: this book contains strong language.
Review:
Thank you to the author, Michelle Abbott, for gifting me with a copy of this book in exchange for an honest review!  This is the second book in the In Chains series (I reviewed the first book HERE).
Once again, I rated this 4 stars simply because it’s a very good book, but it just wasn’t 5 star material for me.
The ending was rather abrupt although that epilogue wrapped things up nicely!  I actually liked the way it ended (sorry I can’t say more… spoilers!).  It was a nice change from other dystopian books that feel the need to ALWAYS end that way.  So that was awesome!  However, I felt like Savannah’s little side thing at the end there was sort of an after thought.  Maybe move it up 2 or 3 chapters?
Also, there was more background and world-building in this book which was good (I mentioned in my last review that there wasn’t much world-building in the first book).  It wasn’t a whole bunch but it did help me understand where the setting is and what the mindset in that world is.
I loved Savannah’s character!  She’s such a different MC than I’ve seen – a rebel but still conforming to society.  Not just a ‘to the heck with it’ character like the kind of MC’s in other dystopian/alternate world books.  She also helped to create a nice love story that isn’t fluffy at all.  I’ve read marshmallow romances and this is not one of those.  This is more like… a lobster romance?  I’m sorry, that’s a horrible comparison but I can’t think of anything else.  It’s a hard road and sometimes the lobster came back to life and tried to stab Savannah and Kaiden in the face and sometimes it was just plain deliciousness.
The Final Verdict:
Once again, a very addicting book with a lobster romance  (I really need a better word for it..).  I’m a bit conflicted about how much I liked the end but there was a lot more world-building and Savannah shone!
4 stars
Quotes:
Yeah… I’m so organized that I somehow didn’t write down any quotes for this one either… *facepalm* so I’ll go do that and get back to you and update this!

0 thoughts on “R&R Review Friday: Locked Together by Michelle Abbott”