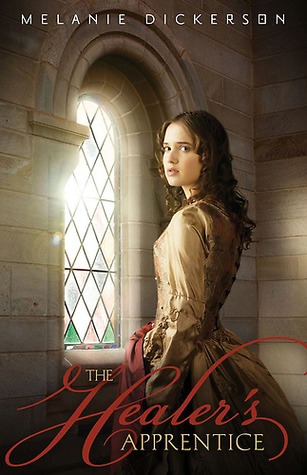 Rose has been appointed as a healer’s apprentice at Hagenheim Castle, a rare opportunity for a woodcutter’s daughter like her. While she often feels uneasy at the sight of blood, Rose is determined to prove herself capable. Failure will mean returning home to marry the aging bachelor her mother has chosen for her—a bloated, disgusting merchant who makes Rose feel ill.

When Lord Hamlin, the future duke, is injured, it is Rose who must tend to him. As she works to heal his wound, she begins to understand emotions she’s never felt before and wonders if he feels the same. But falling in love is forbidden, as Lord Hamlin is betrothed to a mysterious young woman in hiding. As Rose’s life spins toward confusion, she must take the first steps on a journey to discover her own destiny.

“
Review:
I love a good fairy tale retelling and this good was just that.  It was so engrossing to me!
The magic aspect really intrigued me and added so many plot points that helped the story along.  It also created something that was different yet the same from the spindle in the traditional Sleeping Beauty story.
The one plot point that just sold my heart is one I can’t even share with you because it has MAJOR spoilers and I’m trying to be as spoiler-free as possible.  I can tell you this though – it creates a complete 180 in the storyline that I was expecting but still sort of came as a shock to me.
The only reason I docked a star is because it was sort of predictable.  I realize that it is a Sleeping Beauty retelling and all but I knew right away who would be the fakes and who was for real and why and how and all that jazz.  It was a bit of the classic cliche sort of stuff.
Oh and the cover is so beautiful and so connected to the story!  I love it!
The Final Verdict:
Overall, a very nice Sleeping Beauty retelling (loosely-based) that was a bit cliche.  However it was very engrossing and some of the plot points were just masterfully done!
4.5 stars
Quotes:
“Everyone will say I’m insane, but I don’t care, Rose. Is it insane to marry the girl I love? A girl with golden brown hair, with gifts of beauty and goodness and storytelling?”

0 thoughts on “Review Monday: The Healer’s Apprentice by Melanie Dickerson”