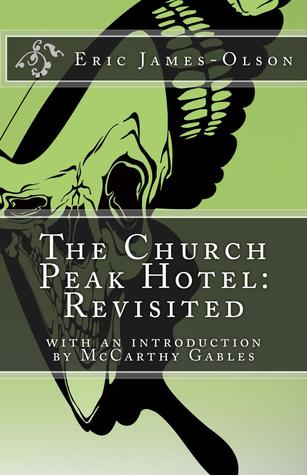 Amazon  Goodreads  Book Depository  Barnes and Noble
Goodreads Blurb:
“A century has elapsed since this collection of short stories, originally published via tChip under the heading “Dark Tales from the Year 2065 and the Decades that Followed,” first caught the collective imagination of the young and the bold. It need not be said that these ‘tales’ contain moments of real suspense, true horror, sheer insanity, unrelieved dread.

In this new authoritative edition, foremost EJO scholar, McCarthy Gables, provides a groundbreaking introduction revealing the true identities of the original authors, detailing the nature of their literary and political intent, connecting these seemingly minor works to the authors’ major novels: Farmers and Cannibals, But the Angels Never Came, and Just After the Fall. (The Church Peak Hotel: Revisited is an interconnected collection of character vignettes. The stories are connected through the fictional introduction and commentary by McCarthy Gables as well as common themes, motifs, characters, and settings. It’s all within the same fictional universe. Although it doesn’t quite read like a novel, the stories are meant to be read in order. This is the fourth book in the series containing Farmers and Cannibals, But the Angels Never Came, Just After the Fall, and Whom Cain Slew)”

Review:
Thank you to the author, Eric James-Olson, for gifting me with a copy of The Church Peak Hotel: Revisited in exchange for an honest review!
Mr. James-Olson did a fabulous job making it seem as real as possible!  At the beginning, there’s a section that really makes it seem as though this is all happening in the future and it’s eerily close to what actually could happen.  Hopefully it doesn’t…

The one thing I think this book lacked but also was it strongest point was chronological cohesiveness.  Well, let me rephrase that.  More of a lack of clarity in where the puzzle pieces fit together.  On one hnad, this is actually a good thing because of the fact that this is set in a very, very chaotic time and the story narrated one point of view where the character was basically insane.  This can blur time a bit.  However on the other hand, this made it sort of hard to follow and I kept flipping back and rereading sections to get it together.

This is such a dark book but it does such a good job of showing the world in the future in all it’s twisted bleakness.  Every narration is more chilling than the last and definitely left a lasting impression on me.

If you’re going to jump into this series, I suggest you read the books in order but if you don’t ‘get’ the first few books, this addition is a good overarching piece that shows and overview of all the characters and the world.

Speaking of the characters, I don’t know why but I really liked the characters.  Some seemed to be reduced to their animalistic state while others in different situations tried to maintain their humanity.  This is actually a really good series to read for Halloween (even though it doesn’t have ghosts in it!) just because of the mood and how it makes you feel while you’re reading it.

The Final Verdict:
A good addition to a very eerie series and makes for an excellent Halloween story.  It did lack a bit of chronological clarity although the characters are well done.
3.5 stars