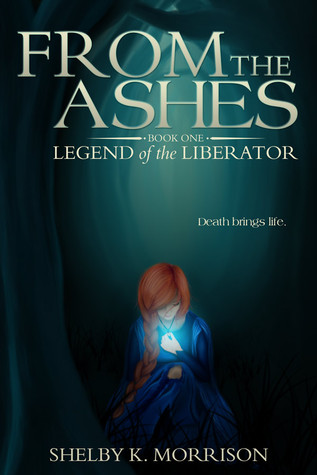 Amazon  Goodreads  Barnes and Noble﻿
Goodreads Blurb:
“For eighteen years Aia Wynnald has lived a lie. Raised as a highborn in the Kingdom of Tharien, she’s filled her days with tutors and archery lessons. But simmering beneath her polite surface is a dangerous gift, one which she must keep a secret. Aia is a Bender. And in Tharien, Benders are feared and hunted.
When her unruly power breaks free with dire repercussions, Aia’s lifelong goal of independence shatters. As she scrambles to piece her life back together while evading capture, she disturbs a vengeful force intent on destroying the kingdom.
Now, with the help of an unlikely ally, Aia will decide the fate of Tharien. To rescue those she cares about will require accepting what she is. But can she risk becoming the monster she’s dreaded to save the very citizens baying for her blood?”
Review:
Thank you to the author, Shelby K. Morrison, for gifting me an ARC copy of From the Ashes in exchange for an honest review!
﻿
Wow.  That’s my first impression of this book.  My second impression is pretty much identical!  When I started reading this, I became so addicted to finding out what would happen in the end!  It didn’t help that people were constantly interrupting me with questions and problems but I prevailed!  You may ask, what’s so great about this book Laura?  I am here to tell you just that!  So go grab a drink and some popcorn because here we go!
First off, I think you all know I have a soft spot for fantasy books.  This book had all the fantasy aspects: different world, strange powers whose origins are mysteriously shielded from the public, badass main character facing adversity, mentions of different languages and kingdoms, etc, etc, etc.  One thing I really loved about the relationship between the public and the Benders is how it’s so controlled by emotion and politics.  Benders don’t have to be dangerous but it’s the people who fear them that force them to be dangerous.  It’s an interesting concept that can be applied to the real world.  If we don’t fear things, and scorn them and try to eliminate them, and instead nurture their powers and individualities with love and understanding, we’d be living in a much better world.
This book also had multiple POV’s.  They were brilliantly done.  Even though they didn’t have a heading that proclaimed it to be ‘Aia’s POV’, it was still remarkably clear and the transitions between the POV’s were spotless.  It was like they naturally flowed together and the author didn’t force another POV in where it didn’t fit.
As for the characters, I loved how we got a good amount of background on most of them (pretty good for a first book in a series) through regular means or through character flashbacks in dreams or other things.  It really allows you to see into each character’s motive and how they think and feel.  However, the reason this isn’t 5 stars is because at times – especially at the beginning – I felt like I was being left behind.  You know how when you join a conversation halfway through you can’t just jump in and know it all.  Someone has to explain it to you and tell you what you missed.  I feel like there could have been a little more background on the kingdom, Benders, Breakers, and just the world in general.  We got a lot of background on the characters but that doesn’t tell you much about the world.
The Final Verdict:
An amazing example of a fantasy book!  I can’t wait to read the second book and learn what happens to Aia and Cole!  I loved how the author didn’t spring right into romance and just let things develop like they should.  The POV’s are flawlessly melded together and the idea behind the whole thing can be so much more.  Definitely an onion book!
4.5 stars
Meet the Author – Shelby K. Morrison 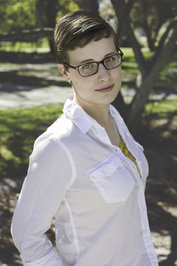 Goodreads
Shelby K. Morrison is the author of Shattered, devout member of the Pointless Research Addicts support group, and was voted Most Likely to Be President in high school. She believes fiction should be an escape and any great escape involves a world of wonder, characters you wish you knew, and good food. She can usually be found in three places; her office, the couch or….well just those two unless an overcast day calls her out of doors. She has a particular weakness for animals, Studio Ghibli movies, and Flamin’ Hot Cheetos (resulting in a frequently stained keyboard). She is not opposed to tokens of appreciation, particularly edible ones. But if you really want to make her smile, drop her a line!
Interview:
1.  Was it difficult creating a whole new world to set Aia’s story in?
Oh very difficult. I’d never truly created my own world. I’d created partial worlds, or paranormal worlds, but never a whole in-depth world so this was new for me. But it was the most fun for sure. This is why I became a writer. To create, to imagine, to have fun.
2. How long did it take you to write From the Ashes?
From the Ashes originally was one of my stories I’d written in Jr. High. Only the smallest premise remains, but technically I could say this story has been in the works for years. However, truly writing From the Ashes, it took me about 5 months I think. I try to cut down on my number of drafts and outlining time with each book in my quest for the perfect writing schedule. Unfortunately even if I finish in 5 months, there is still a month with beta readers, a couple months with editors and then another few months with advanced reviewers. So it makes the whole process seem much longer.
3. How would you describe From the Ashes in 7 words or less?
A thrilling fantasy with the ultimate choice.
4. What’s your favorite thing to do on a rainy day?
Write of course! Or read. Really I adore rainy days, so I could do anything! But it really is the perfect  backdrop for writing.
5. Are you a reader as well as a writer?
If so, any favorite books/genres? Of course! Favorite genres are usually YA Fantasy if the focus isn’t romance, Adult Fantasy if there isn’t a surplus of fluffy world-building, and thriller if it isn’t a crime drama following a retired detective. 🙂 I’m a little picky.
6. Would you ever want to write a book other than fantasy?
I did! 🙂 My first book, Shattered, was a Psychological Thriller. 🙂 With From the Ashes, I’ve returned to my roots and have attempted to combine my love of thrillers with my love of fantasy worlds. I’ll most likely continue with Fantasy, but may occasionally dip back into Thriller fiction.
7. What fictional world would you love to live in?
Umm…any of them? lol The real world is far too boring. Take my anywhere else, please!
8. Any advice for aspiring writers?
Keep writing. More and more and more. Ignore the critics. Don’t write with your mother or grandmother in the back of your head. Don’t write with your high school competition, the teacher who doubted you, or anyone else. Write for you. Write what you love. Write with only you in your thoughts. If you write for others you’ll never have the product you want. Worse, if you don’t write at all, you won’t have any product. So just write. And then write some more.

Thanks for the interview Shelby!

0 thoughts on “R&R/ARC Interview and Review Sunday: From the Ashes by Shelby K. Morrison”