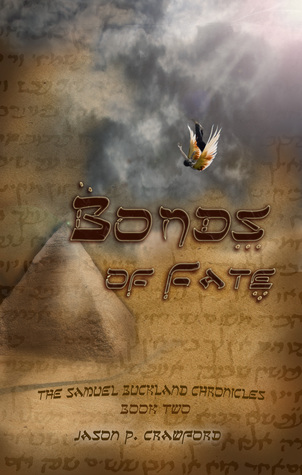 Amazon  Goodreads  Barnes and Noble
Goodreads Blurb:
“Two years after saving the Archangel Gabriel, Sam Buckland is feeling the pressure of a world plagued by evil. When the Angels Fall and Heaven is attacked by an ancient Egyptian sorcerer, however, he must put aside his weariness and muster all his powers and those of unlikely allies to turn aside this new threat.”

Review:
Thank you to the author, Jason Crawford, for gifting me with a copy of Bonds of Fate in exchange for an honest review!
I really, really enjoyed this installment of the Sam Buckland series!  It was really nice to come back and see how Sam was doing  with his powers and saving people and all that.  I was also curious at the end of the last book to see how Sam would use his power in the real world and how to subtly help the people that he could help.  I loved that he became a therapist/psychiatrist.  I don’t know… it just fit for me.

One thing I’m dying to talk about is the ending.  Like WHAT THE HECK??  It was a really unexpected solution but totally makes sense when you think about it.  I won’t say too much but I will say that it will blow your mind.  I also really liked the introduction of the different pantheons and dieties.  I really liked how the author addressed that yes, there are different belief systems out there and maybe more than one actually do coexist.  It reminded me kind of The Butterfly Crest by Eva Vanrell (my review for that book will be up shortly) except way less violent.  They have an agreement and for the most part try to stick to it.  And I did say for the most part.

Hmm…. what else did I want to talk about… You see the problem with this is that I read the book for the first time a little while ago and I didn’t write down my thoughts right away (which was a totally stupid move by the way) so now I’m rereading it but you know a book isn’t the same once you’ve read it once.  It’s my solid opinion that the book is never the same once read once.

I also wanted to talk about Sam’s adopted daughter.  I actually loved how she was kind of bratty at first and acting like a child.  It was actually so true no matter how much we wish it wasn’t.  She got all defensive when new and crazy things started happening and that is remarkably realistic.  I’d go crazy too!  So in that sense, the book was very relatable.

The Final Verdict:
A very nicely written sequel to an excellent opener.  This is such a great extension to the previous book’s plot line before branching off in another, more complicated direction.  I absolutely loved the ending and especially Sarah.  Satan learning to be human was amusing to watch!  The sarcasm in this book was beautiful!  That’s my kind of humor!
4 stars


Quotes:
“‘There was someone else in that woman, possessing her.’  He leaned in.  ‘I…I don’t think it was a demon.  It doesn’t look like any demon I’ve seen.’
‘And, of course, you’ve seen them all.’  Vassago coughed, then wiped its hand on its sleeve.  ‘So you’re an expert.'”