Goodreads  Amazon
Goodreads Blurb:
“The Ringer’s Masquerade Series features all three full length novels: Devil’s Lullaby, Death’s Melody and Angel’s Requiem.
Sebastian’s haunting gaze penetrated my very being, revealing my secrets, fears, and desires. My name rolled off his tongue, tempting me to take exactly what I hungered for. His world was laced with inconvenient truths; mine was saturated with sweet, beautiful lies. Sebastian promised me nothing of a happy ending. The demonic spawn with an angelic voice could derail my only purpose for living, but still I didn’t want to look away. My curiosity would certainly be my undoing—but then again, death was inevitable.
Life perceived by the soulless ones…
Created by the unorthodox hospital known as the Ringer, Catherine is fated to die on her next birthday. As a soulless spawn, her only purpose for existence is to be the perfect organ donor for her terminal progenitor. Although Catherine has never met her progenitor, an unexplainable bond ties their lives together forever.
Catherine waits patiently for death, until Sebastian gives her a taste of something more, something worth fighting for. The uncontrollable, consuming passion they share begins to grow dangerous as he reveals the Ringer’s most guarded secrets—secrets they’d kill to keep.”

Goodreads  Amazon
The countdown to my death has begun… Created by the unorthodox hospital known as the Ringer, Catherine’s fated to die on her next birthday. As a soulless spawn, her only purpose for existence is to be the perfect organ donor for her terminal progenitor. Although they have never met, an unexplainable bond ties their lives together forever. Catherine waits patiently for death, until Sebastian gives her a taste of something more, something worth fighting for. The uncontrollable, consuming passion they share begins to grow dangerous as he reveals the Ringer’s most guarded secrets – secrets they’d kill to keep.
Trailer:

Goodreads  Amazon
“I was created to die. Death isn’t what scares me. What I’m afraid of is what they’ll do if I don’t play by their rules,” James said.“You don’t have to do everything they want, James.”The rage in James’ eyes fizzled into misery, but even as anguish threatened to overtake his soul, hope lingered. His familiar scent drew me closer. It reminded me of the young man he used to be. He towered over me, as if he could shelter me from the cruelty of life. It was tempting to let him, but I knew it would just be another lie. The Ringer made a game out of life and death. They created the rules and demanded everyone abide by them orsuffer the consequences. Nevertheless, I couldn’t ignore the truth any longer. I needed answers. “Yes, I do. If I want to protect the ones I love…” James said. He leaned in close enough to steal a kiss. An agonized smile crept onto his face.“To protect you.”A fate worse than death…All of Catherine’s dreams ended with her progenitor’s sacrifice and the loss of her beloved. Surrounded by a scornful family and friendships built upon lies, she’s never felt more alone. The Ringer denies her plea to be an organ donor yet monitors her relentlessly. She is unable to live a life free of the hospital’s control. Her future unravels as disturbing questions arise and hidden lies surface. However,what’s even more troubling than the Ringer’s dangerous secrets are the torturous punishments they deliver to those who defy them.
Trailer:

Goodreads  Amazon
What was a life worth? It couldn’t be measure as currency or in time, yet it was priceless. The man I loved saved his brother’s life by giving his own. Countless others benefited from his death when his organs were harvested. The recipients still had their dreams. Their families were not torn apart because of disease. His life was measured by the number of breaths each recipient took. Closing my eyes, I could still hear his voice, encouraging me to be strong. “The Ringer created miracles,” I said. My voice wavered. The pain harbored in my broken soul threatened to stop me from speaking the truth, as I saw it. “They gave me my best friend…and then they killed him.”Abide by the Ringer’s masquerade or suffer the consequences…Renowned as the Ringer’s medical miracle and a politician’s daughter, Catherine is pulled into a bureaucratic conflict. Battle lines are clearly drawn. Sebastian firmly believes the truth must be told, while James relentlessly promotes the hospital’s practices. She must choose to speak her voice and unveil the Ringer’s wickedness, or play by their rules to insure nothing unfortunate happens to her loved ones. The Ringer might not kill her, but they threaten to tear her life apart, one spawn at a time.
Teasers: 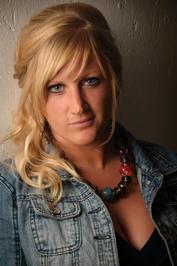 I specialize in dark, paranormal romance – think “happy ever after” but with a twisted, dark chocolate center. Real-life romance isn’t only filled with hugs, kisses, unicorns, and rainbows. True-love can be more thoroughly described in times of darkness and tribulation. It’s in those harsh moments where you see what a person is truly capable of – both the good and bad. Sometimes prince-charming isn’t always on time, and the glass slipper is a little snug. However, it doesn’t mean Charming is not Mr. Right, and who says every shoe is the perfect fit?
“Warning: Addictive passion erupts from her mouthwatering descriptions” – recent review.
Sarah J. Pepper lives in South Dakota with her real-life prince charming. At a young age, she fell for paranormal books and now incorporates that genre with romance that thrives in the hearts of us all. When she’s not storytelling, she’s most likely biking, hoarding chocolate, or taking a bubble bath. Get a glimpse inside her head at www.peppersreadingcorner.com
Connect:
Website: http://www.sarahjpepper.com/
Facebook: https://www.facebook.com/sarahjpepper.author
Twitter: https://twitter.com/sarahjpepper
Instagram: http://www.enjoygram.com/sarahjanepepper
Pinterest: https://www.pinterest.com/peppersarahj/
tsu: http://www.tsu.co/sarahjpepper
Amazon Author Page: http://www.amazon.com/Sarah-J.-Pepper/e/B007YHT7XS/ref=sr_ntt_srch_lnk_1?qid=1435178979&sr=8-1
LinkedIn: https://www.linkedin.com/pub/sarah-j-pepper/3a/71/b5b
Goodreads: https://www.goodreads.com/author/show/5762464.Sarah_J_Pepper