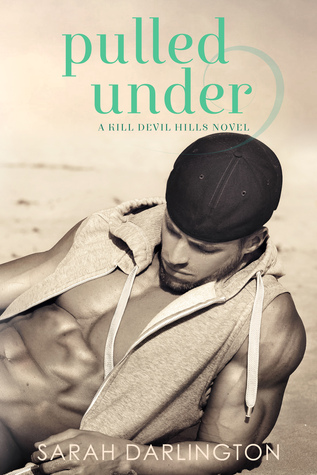 : a grown man who is very immature, therefor considered a man-childmanwhore. noun.: a promiscuous man who has no regard for his sexual partners or the emotional value of his relationshipsRhett Morgan couldn’t have been more wrong for me. The guy drank beer in the shower, for crying out loud. He had no prospects for the future, had slept with half the women in our beach town of Kill Devil Hills, and had no desire to change his manwhore ways.And when Ben Turner, the guy I had loved from afar for the past four years, died and I couldn’t get over his death, I desperately needed a distraction. A distraction like Rhett. So I used him for a one-night stand. Because, after all, that’s the only thing a guy like Rhett is good for…right?”

Review:
Thank you to the author, Sarah Darlington, for gifting me with a copy of this book as well as the previous two in the series in exchange for an honest review!
Just like the cover implies, I was immediately pulled into this book.  I would suggest reading the first two books in the series just because they give a little more background on the characters in the story.  This book takes place during the time that the first two do (it arches over both)  so of course, like any book that comes later in the series, there is less information presented about the characters.  However, after reading both of the previous books as well, I would like a little more background on their high school days (including Sydney’s crush on Ben).  It just seemed like that was all stated and it never really connected with me.
Other than that minor detail, I felt totally connected with the story.  All of the conflicts felt realistic and the character’s stayed true to themselves.  They really felt like real people.  The romance scenes were perfectly placed and spaced so it didn’t feel rushed or awkward.    Just in general, this books struck a great balance between romance, hilarious lines, and crazy plot twists (the Ben thing was just… WHOA).
While we’re on the Ben subject, without saying too much, I can tell you that I didn’t like him AT ALL.    What he did was so so selfish.  I actually would like to read a book from his POV just to know what on EARTH he was thinking!
The last thing I wanted to mention was the multiple POV’s.  They helped the story so much and I’m so glad the author decided to allocate POV scenes whenever it seemed necessary, not just alternating between two or three characters.  Most of the time, that’s what happened, but when a particular scene happened, there’d be another character that got their own POV.  I could always pick the different voices apart and I was never confused who was speaking at the moment.
The Final Verdict:
An excellent modern romance with very realistic characters that jumped off the page.  I would have liked a little more background on Ben because as it stands right now, he’s just a terrible person to me and I don’t really connect with his actions.
4 stars
Giveaway