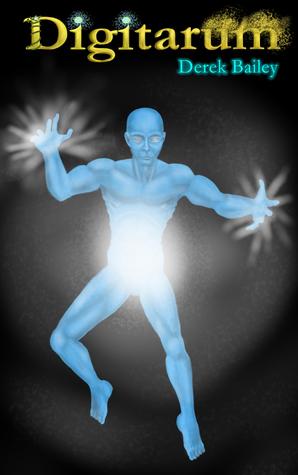 Amazon  Goodreads
Stand-alone to date
Goodreads Blurb:
“A grand fantasy epic that draws inspiration from fictions both old and new. Five gods are born into a world of absolute nothingness and have but one task to complete – build. Each of them have their own special powers and talents which they lend toward this effort, but before long, darkness takes root within the world that they construct. The gods struggle against their enemy throughout the ages and despite all of their power, they find that evil is a cunning opponent which comes in many forms. They care for the world as it grows to new heights and serve as champions for the people that live within it. This sprawling tale spans from the birth of a world until the end of its days and takes readers on a journey that freshly combines familiar narrative elements and themes.”

Review:
Thank you to the author, Derek Bailey, for gifting me with a copy of Digitarum in exchange for an honest review!
I’ve never ever read a book quite like this one before.  The focus of this book is very large scale but it still manages to capture the small details.  Although, because it was so zoomed out, you can’t really connect with the characters as well as you could have if it was smaller.  I gathered a sense of their motivations but couldn’t get into their heads as well as I would have liked.
That, however, is my only complaint about this book!  The rest is simply stunning.  I haven’t read that many big picture books so I’m particularly glad I read this one!  Let me start by talking about the gods:  I really liked how they all seemed to have ‘their purpose’.  That really comes into play when one of the gods, Tubu, goes ‘bad’ (evil and good really is subjective isn’t it?).  He explains it by saying it’s his purpose just like all the other gods have more ‘noble’ purposes.  It does make you think about how we define good and evil and whether good really can exist without evil in the world to provide a contrast.
To that end, it also captured human emotions very well and what the gods ended up learning about the people they created.
Now the ending.  I feel like I have to talk about the ending (although in the vaguest of senses, don’t worry!) simply because it was such a surprise.  It’s almost like how teachers tell you never to end a story with the MC waking up and it was all ‘just a dream’.  Except this ending was more classy than that and really brought together the supposed fantasy of the world the gods rule and the modern world.  It does make your head spin a little and then you go back through looking for all those little things that were mentioned and realize how they fit in.
I’m not sure if I’ll reread it, but it certainly was a pleasure to read while it lasted!
The Final Verdict:
Quite a lovely big picture book that adequately captured the human spirit and turns the wheels of your mind.  Good and bad are made clearly to be entirely subjective which I always enjoy thinking about!
4 stars