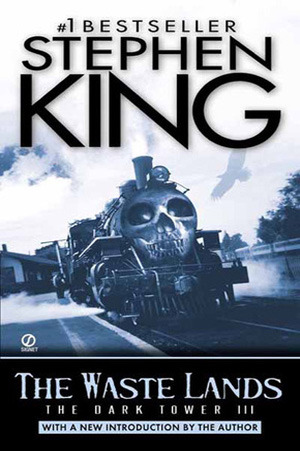 Amazon  Goodreads  Book Depository  Barnes and Noble
The Dark Tower #3
Goodreads Blurb:
“In 1978, Stephen King introduced the world to the last gunslinger, Roland of Gilead.  Nothing has been the same since. More than twenty years later, the quest for the Dark Tower continues to take readers on a wildly epic ride. Through parallel worlds and across time, Roland must brave desolate wastelands and endless deserts, drifting into the unimaginable and the familiar. A classic tale of colossal scope—crossing over terrain from The Stand, The Eyes of the Dragon, Insomnia, The Talisman, Black House, Hearts in Atlantis, ’Salem’s Lot, and other familiar King haunts—the adventure takes hold with the turn of each page.

And the tower awaits….Roland, The Last Gunslinger, moves ever closer to The Dark Tower of his dreams and nightmares—as he crosses a desert of damnation in a macabre world that is a twisted image of our own. With him are those he has drawn to this world: street-smart Eddie Dean and courageous wheelchair-bound Susannah.Ahead of him are mind-rending revelations about who and what is driving him. Against him is arrayed a swelling legion of foes—both more and less than human…”

Review:
The main thing with this whole series that you have to be prepared for is the heaviness.  It can be a little hard to get into and very dense with some not-so-easily deciphered paragraphs.  That’s the main reason this series isn’t getting higher ratings from me.  I just can’t get into it and staying with the story requires constant attention to everything.  I’ve read other Stephen King books and this series is definitely the more difficult one.
However, I am really enjoying the story.  We get to see more of what is actually going on in this story and we learn a bit more about the parallel’s between worlds.  When I say parallel worlds, I don’t mean the kind in Trial By Fire, where they’re all at the same point in time, just different people making different choices.  I mean parallel worlds where even time doesn’t line up by there are connections between them all.
To that end, I did like how we start to see connections between the other worlds and Roland’s world that is ‘moving on’.
Something else I want to make sure that I include is the cast of characters.  Even though we only know so much about each character, through the trials that they face, you know them so much better than you could imagine.  You really get to see how their minds work.  One of the only mysteries left is Roland!
The Final Verdict:
Overall, an okay book.  Just in general, the whole series moves rather slowly with some difficult to decipher sections and lengthy explanations.  The story is very intricate and interesting, however!
3.5 stars
Quotes:
“It’s just that I take riddling seriously. I was taught that the ability to solve them indicates a sane and rational mind.”
“Roland grabbed Jake and hauled him to his feet. “You came!” Jake shouted. “You really came!” “I came, yes. By the grace of the gods and the courage of my friends, I came.”
“All is silent in the halls of the dead. All is forgotten in the stone halls of the dead, Behold the stairways which stand in darkness; behold the rooms of ruin. These are the halls of the dead where the spiders spin and the great circuits fall quiet, one by one.”
“Kill if you will, but command me nothing!”
“Wow. This makes grand central look like a bus stop in Buttfuck Nebraska.”
“Don’t ask me silly questionsI won’t play silly gamesI’m just a simple choo choo trainAnd I’ll always be the same.I only want to race alongBeneath the bright blue skyAnd be a happy choo choo trainUntil the day I die.”
“Ka was like a wheel, its one purpose to turn, and in the end it always came back to the place where it had started.”