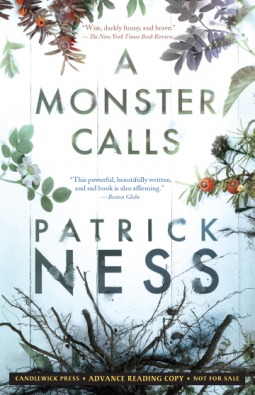 At seven minutes past midnight, thirteen-year-old Conor wakes to find a monster outside his bedroom window. But it isn’t the monster Conor’s been expecting– he’s been expecting the one from his nightmare, the nightmare he’s had nearly every night since his mother started her treatments. The monster in his backyard is different. It’s ancient. And wild. And it wants something from Conor. Something terrible and dangerous. It wants the truth. From the final idea of award-winning author Siobhan Dowd– whose premature death from cancer prevented her from writing it herself– Patrick Ness has spun a haunting and darkly funny novel of mischief, loss, and monsters both real and imagined.”

Review:
This book, on the whole, was just fabulous.  This book is a true onion book!  Let me just say, in general, this was a very emotionally taxing book but it was worth every page.  As you get further and further into the book, Ness hits you with some heavy topics that require some very deep and introspective thinking about yourself and the world around you.

Lets talk specifics shall we?  First off, I loved the connections that were made continuously throughout the book.  I don’t necessarily mean within the book (although that did happen quite frequently).  I’m talking more about life connections how you see these themes everywhere.  I especially loved the monster and the stories he told about people.  It really makes you think about what’s considered right and how you fit into the bigger picture.

I actually really liked the limited time line of this book.  It takes place over a couple of weeks (with a select few flashbacks).  I feel like the short time span actually helped me zone in on Conor’s feelings at the moment and how he’s dealing with his mother’s death.  The blurb is exactly right – “a haunting and darkly funny novel of mischief, loss, and monsters both real and imagined”.  You can see those themes come through.

Along those lines, I really liked Conor as the MC.  I feel like it wouldn’t have been as powerful if it had been told from any other perspective.  I actually just finished reading The Ocean At The End Of The Lane by Neil Gaiman for my English class and we talked about the importance of POV within that book.  They’re really similar in the the sense that the perspective it’s told from is a child’s.  Children see the world in such a different light than adults do and it really means something when the monster appears to Conor as opposed to one of the adults in the story.

The Final Verdict:
A truly haunting book that provokes thought about topics I’ve never really touched before.  The POV was an excellent choice and the limited time span really lets you know Conor in the only way that matters.
5 stars


Quotes:
“So the good prince was a murderer and the evil queen wasn’t a witch after all.”


“You know that your truth, the one that you hide… is the thing you are most afraid of.”


“I did not come to heal her, the monster said. I came to heal you.”


“You do not write your life with words…You write it with actions. What you think is not important. It is only important what you do.”


“Stories are the wildest things of all, the monster rumbled. Stories chase and bite and hunt.”


“Because humans are complicated beasts, the monster said. How can a queen be both a good witch and a bad witch? How can a prince be a murderer and a saviour? How can an apothecary be evil-tempered but right-thinking? How can a parson be wrong-thinking but good-hearted? How can invisible men make themselves more lonely by being seen?
“I don’t know,” Connor shrugged, exhausted. “Your stories never made any sense to me.”
The answer is that it does not matter what you think, the monster said, because your mind will contradict itself a hundred times each day. You wanted her to go at the same time you were desperate for me to save her. Your mind will believe comforting lies while also knowing the painful truths that make those lies necessary. And your mind will punish you for believing both.”


“There was once an invisible man who had grown tired of being unseen. It was not that he was actually invisible. It was that people had become used to not seeing him.
And if no one sees you, are you really there at all?””


“The monster showed up just after midnight. As they do.”


“Sometimes people need to lie to themselves most of all.”


“Four lines, and the world went quiet.I’m sorry for telling everyone about your mum, read the first line.I miss being your friend, read the second.Are you okay? read the third.I see you, read the fourth, with the I underlined about a hundred times.”


“If you speak the truth, the monster whispered in his ear, you will be able to face whatever comes.”


“After he killed the farmer’s daughter, said the monster, the prince lay down next to her and returned to sleep. When he awoke, he acted out a pantomime should anyone be watching. But also, it may surprise you to learn, for himself. The monster’s branches creaked. Sometimes people need to lie to themselves most of all.”


“Stories don’t always have happy endings.”This stopped him. Because they didn’t, did they? That’s one thing the monster had definitely taught him. Stories were wild, wild animals and went off in directions you couldn’t expect.”