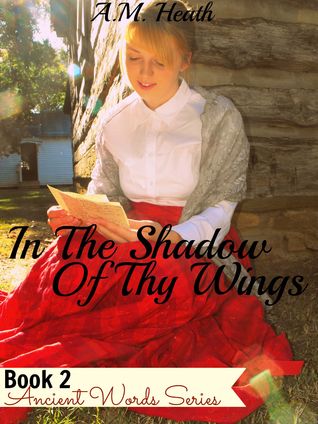 Amazon  Goodreads
Ancient Words Series #2
Goodreads Blurb:
“Devastation sweeps across the land, and the families of Maple Grove cannot escape when war arrives at their front doors. After her father entrusts her with a new and dangerous task, Sally Chandler must find the courage to obey despite her fear. Meanwhile, her best friend, Claire Harper, is determined to serve others, even if it means putting herself in danger. But with a certain handsome Union soldier stationed nearby, Claire finds her heart in danger of falling for the enemy. Their differing loyalties create complications that neither could expect; her twin brother fighting for the Confederacy is only one of them. Frank Harper left home with one goal in mind – to become a prosperous plantation owner. Two years later, not only is he further from his goal, but he’s beginning to question his own desires–something that becomes more complicated when his heart becomes involved. The families of Maple Grove must learn how to survive the uncertainty of war and a country split in two. While the war in the nation rages on, the battle within grows stronger. Will they learn that the only safe place to hide is in the shadow of Thy Wings?”

Review:
Thank you to the author, A.M. Heath for gifting me with a copy of In the Shadow of Thy Wings in exchange for an honest review!
This book took me on a roller coaster of emotions!  One moment, everything is fine and the next, everything is falling apart!  Once again, I thoroughly enjoyed reading about the Civil War time period and people’s lives as they lived through a period of war that split the nation.  Claire and Sally were my favorite two characters by far in this book!  Their dialogue is quite wonderful to read!  I also, of course, love reading from the contrasting perspectives of Frank and Ralph.
In this installment, we find out more about the Chandler  family and so many things start to make sense that were hinted at in the first book.  I don’t want to spoil anything so I’ll speak of this rather briefly and vaguely.  What is revealed about the family changes the name of the game and makes you see things in an entirely different light.  It also brings to the table the difficulties of dealing with shifting loyalties and the dangers of living in the South during this time period when you disapprove of certain things.
Let’s move onto a different topic shall we?  This is another point that I’ll have to be vague about so I don’t spoil anything.  Be prepared to have your heart ripped out and stomped on by a dozen horse’s hooves.  A major event takes place in the middle of the book and like the previous plot point I was talking about in the above paragraph, this changes the name of the game!  It messes with the one thing that’s a constant in stories (that is, until recently, apparently).  While I’m incredibly sad and angry that it happened, the event also then makes it possible to allow us to see the healing process and the melancholy that’s left as the characters move on.  I can also appreciate the way those scenes were written.  They had the perfect amount of each character’s POV (with distinct voices ranging across the spectrum).
That all being said, I really liked how the book was structured as well as how the author chose to end it.  War is a dangerous time and the author didn’t sugarcoat anything.  Bad things happen in war, tragic things, and we are allowed a glimpse into that life with this book.
One last thing: this book does contain a significant amount of religious content (Christian based).  It wasn’t very over-powering, as strange as that may sound.  The author made it work with the time period and the situations and the Bible quotes that were used added a lot to the storyline.
Quite honestly, I can’t wait to read the next book and see what becomes of the characters!
The Final Verdict:
A heart-wrenching book that displays the reality of war – both on the front lines and at home.  It was a roller coaster of emotions that carried me from joyousness to grief in a matter of one or two pages.  The structuring is spot on and the POV’s are perfectly placed.
4.5 stars
Quotes:
“Her laughter drew the attention of those around them as Frank spun her around.  Setting her down, her laughter trailed away, but she had yet to release him completely.
‘Share the wealth, Harper,’ Jared Smith shouted from somewhere behind him.
Letting go of her, Frank turned to Jared and spread his arms open wide, offering him a hug that he knew the man didn’t want.
Everyone roared with laughter when Jared snarled his nose up and shook his head. ‘I’ll take the prettier twin if you don’t mind.’
‘Easy,’ Frank warned with a pointed finger and a purposeful glare.”
Events and Giveaway Links!

0 thoughts on “R&R Review and Giveaway Wednesday (and event links!): In the Shadow of Thy Wings by A.M. Heath”