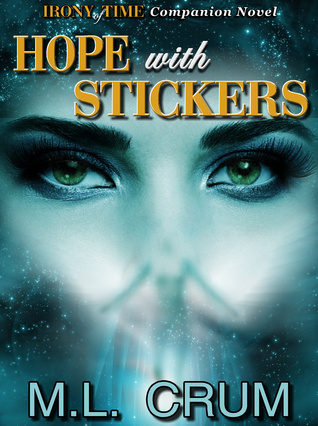 Amazon  Goodreads  Barnes and Noble
Irony #2
Goodreads Blurb:
“Hope Scott is a stranger to herself. She has fossilized her emotions deep within to hold back the pain of being an unwanted daughter, wife, and now the most painful of all…an unwanted mother. The nine years she chose not to search for her runaway daughter has led her down a sorrowful path to the edge of her only child’s grave. Hope must now live with the fact that her child chose to take her own life over coming back home. She barely exists within the pain and has completely closed off her heart. This would have been her story had she never met Miriam Duvall one rainy September day – but meet Miriam she does.

There’s more to the story that was never told in Irony of Time. Read Hope’s story about how this chance meeting and brief friendship changes the course of her life, detouring her into a dangerous world to save her daughter. Within this unnatural world she meets the Novaks, a mysterious family of private investigators dwelling between evil and good. Fearing for her daughter’s life, Hope is forced to ask for help from the arrogant, brash cousin, Rylas Novak, who seems uncomfortably drawn to her for there is something about Hope that resonates deep within him. And there is something about Rylas that Hope desperately wants to hate, but just can’t. During their intense search, Hope quickly finds herself in one perilous situation after another. But could the most detrimental blow come when she finally opens her heart?”

Review:
Thank you to the author, M.L. Crum, for gifting me with a copy of Hope With Stickers in exchange for an honest review!
For this review, I really want to start with my favorite parts because there’s this really cool aspect to this book that I can’t wait to share with you guys!
So this book is the sequel to Irony of Time (my review HERE) and picks up at about the 7/8th mark (total guesstimation here).  Where Irony of Time was from Miriam’s perspective, Hope with Stickers is from Hope’s perspective (the waitress that helped Miriam when she ran away from Ian after discovering what his beginning motivations were for helping her.  The main supernatural aspect encompassing this series is time travel and how time affects us all.  Here comes the cool part: Hope would have never gone through the journey detailed within this book unless she had met Miriam which never would have happened if Miriam’s sister hadn’t died (which sent Miriam on her journey in Irony of Time).  So, really, time is the instigator of this whole series which is really cool considering it’s all about how time brings us together.
That was, personally, my favorite part of this book (and the series in general).  But there are plenty of other great things I loved about this book!
I did really like the cast of characters.  There a lot of different people involved and they all have distinctly different personalities.  There are even several drag queens as characters which I’ve never read about before so that was really cool.
Quite honestly, the best advice I can give you is to pay attention while reading this.  The author does a wonderful job of pulling all of the strings together of the mystery at the end but you have to pay attention during the course of the book to really understand it all and catch everything.
One thing I wasn’t really sure about was Hope and Rylas’ relationship.  It seemed a tad bit predictable and sudden.  However, the way it was twisted at the end was so great.  The ending really threw me through a loop because it was so unpredictable!  You know how MC’s are always supposed to end up with their love interest and have a great life and not die and everything?  Well this book wasn’t nearly as drastic as Allegiant but it was akin to something like that.  Without saying any more, it was such a great ending!
One more thing: I think one of the things that kept me from enjoying the story as much as I could have was the intermittent jolting that was going on.  Sometimes, a misplaced line or a strangely used word would jolt me from the story or cause it to skid a bit.  This is always such a hard thing to explain but to me, it feels like being in a rocket ship and the fuel keeps going on and off so the rocket is flying in a sort of halting motion.
The Final Verdict:
The connections drawn between the two books in this series are truly spectacular and I loved weaving the two together.  The cast of characters were equally intriguing and mysterious, however sometimes the story jolted a bit.
4 stars
Quotes:
“Keeping her gaze down on the dirt and her mind on the task before her made it manageable.  Look down and attack.  Do not look at the words on teh flat, fragile stone.  Do not stare into the pain.”
“She was simply sitting there lost in grief along an unfamiliar path that no parent ever wants to travel.”
“‘Lisa was the same way, but with sticky notes.  You always knew how she felt because of her notes.  And, if they didn’t include her curlicue smiley face, then you knew she was ticked off.'”
“She should be marveling at the vast wonderfulness that was happening before her, but the darkness felt like it had seeped through the window to smother her too.  She moved away, taking the shadow with her, not realizing that the sun finally reappeared again.”
“‘Quade?’ Vinnie’s gravely low voice came from the front seat.  ‘Do I really have limp wrists?'”
“‘The younger man told him that there were too many starfish to save, that he could work all day and not make a difference to thousands and thousands of starfish.  The old man listened kindly and then picked up another starfish and threw it way out into the water.  he then turned to the young fellow and said politely, “It made a difference to that one.”‘”