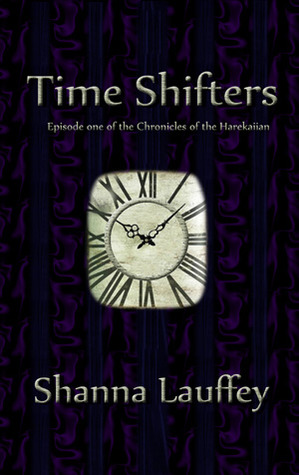 Amazon  Goodreads  Book Depository  Barnes and Noble
Chronicles of the Harekaiian #1
Goodreads Blurb:
“An ancient people who can move through time or space…

A secret that never should have been revealed…One day in a Los Angeles restaurant, Akalya of the Harekaiian witnesses the capture of several of her people and is the only one to get away. Now it is up to her to rescue the captives and learn how… and why… they are being apprehended. The key lies in discovering who is behind the hunt for her people, when no one should have known they existed.”

Review:
Thank you to the author, Shanna Lauffey, for gifting me with Time Shifters in exchange for an honest review!
You know, I never used to read time travel books and now it seems like I’m knee deep in them!  Not that that is a bad thing at all 🙂
Overall, I have to say this is such a great concept and idea that could be developed into so much more in the coming books.  It centers around a class of people who have the ability to time travel (it’s a gene thing) and some of them start disappearing.  At first, it seems like it’s the work of the government, but soon, you get the impression it’s much more complicated than that.  I loved the whole idea of a society of time shifters (sort of like x-men) however, the execution was a little shaky which kept it from fully blossoming.
One thing I think would really solve that issue is a prequel.  In general, I felt sort of left behind when the MC talked about her old life (or really any of the characters) as well as when the general community of time shifters was involved.  While there was background information provided, it was framed in the sort of way one does with the second book in the series.  It’s written in just to remind the reader of what happened.  I did love the MC’s character and thought she was an excellent lead but I could have used a more comprehensive backstory.
With that, when I was reading, the description of the villain got a bit fuzzy for me.  In the middle of the mystery, while it was great (more about that in the next paragraph), I lost track of who was actually the bad guy (or girl).
Back to the awesome things!  I also really loved puzzling through the clues, especially factoring in the whole time travel thing.  Because when you can time travel, you change your position in the past which alters what other people’s actions are.  You can also go back and leave yourself notes so the whole mystery thing gets so much more complicated and interesting when time travel is involved.
The Final Verdict:
A lovely concept with well written characters that could just use more backstory.
3.5 stars
Quotes:
“It is difficult to believe in anything spiritual when you have too much science, yet I have seen things that defy explanation by what is known.”
“The result, however, is a simple movement through the time stream, no more violent than taking a step.”
“The paradox’s namesake example is merely the most common example used when one considers the whole range of possible actions.  If someone travelled back in time to kill Hitler, then the idea to do so would not occur because the Third Reich never happened.  If a time traveller went back to sabotage the technology to allow time travel, then the technology would not exist in his own time to make the journey.”
“The crucial moments in life can come down to a single moment of time.  Everything that happens will be shaped by a single act, and which possible path is opened first.  The end of my people could have resulted from the slightest mistake, but when there is no time to think, you can only follow your heart and what it tells you to do.”