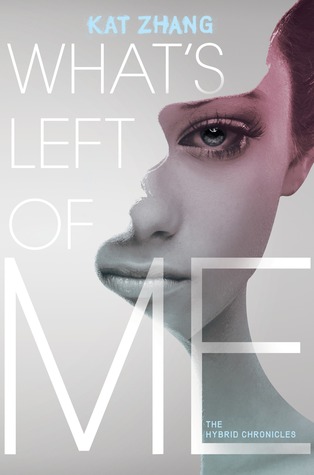 Amazon  Goodreads  Book Depository  Barnes and Noble
The Hybrid Chronicles #1
Goodreads Blurb:
“I should not exist. But I do.

Eva and Addie started out the same way as everyone else—two souls woven together in one body, taking turns controlling their movements as they learned how to walk, how to sing, how to dance. But as they grew, so did the worried whispers. Why aren’t they settling? Why isn’t one of them fading? The doctors ran tests, the neighbors shied away, and their parents begged for more time. Finally Addie was pronounced healthy and Eva was declared gone. Except, she wasn’t . . .For the past three years, Eva has clung to the remnants of her life. Only Addie knows she’s still there, trapped inside their body. Then one day, they discover there may be a way for Eva to move again. The risks are unimaginable-hybrids are considered a threat to society, so if they are caught, Addie and Eva will be locked away with the others. And yet . . . for a chance to smile, to twirl, to speak, Eva will do anything.”

Review:
This is going to be a shorter review because quite honestly, this book was great but I just don’t have all that much to say about it.  So without further ado, leggo.
Really, most of my comments stem from the idea so we’ll start there.
1.  The idea/concept.  This book is centered completely around the idea that in every person, there exists two souls at birth and one of them fades in early childhood so that there is just one left as the individual develops.  I did really like this and it’s definitely different – I’ve never read another book like it!  It also brings up some interesting questions such as who gets to decide which souls lives and which dies as well as how to live a shared life and how it will affect both souls inhabiting the same body.
2.  The setting.  Generally speaking, the settings were great.  Not as descriptively shown as they could have been so sometimes things got a bit fuzzy but nothing that distracted from the story or the ideas that were being conveyed.  I did really like how we got a glimpse outside of the US and I hope that there will be more information in future books.  Also, with the facilities, it was kind of disconcerting how you get this strange fascination with what they are doing at the facilities to the hybrids and why they feel that it’s necessary.  That was one of the best parts of this book for me.
3.  The ending.  The ending was odd.  There’s really no other way to put it.  It was a good, nice ending but it just felt weird and strange and foreign.  I realize that this is part of a series but it was just weirdly wrapped up and it left me perplexed.  Honestly I don’t think I can get into specifics without ruining the book so let’s just stick with odd.
The Final Verdict:
Overall, a very addicting book that has a great idea going for it that brings moral questions along for the ride.  Otherwise, I don’t have particularly strong feelings for this book other than it was pretty good.
4 stars
Quotes:
“There’s only so long you can be at the zoo before it gets old.”
“Keep hope.”
“I was caged in our body and caged in his arms and, somehow, the former was the real prison.”
“I was terrified. I was eleven years old, and though I’d been told my entire life that it was entirely natural for the recessive soul to fade away, I didn’t want to go. I wanted twenty thousand more sunrises, three thousand more hot summer days at the pool. I wanted to know what it was like to have a first kiss. The other recessives were lucky to have disappeared at four or five. They knew less.”
“Addie was warm and radiant next to me, making up half of us. But I – I was Eva, Eva, Eva, all the way through.”
“But understanding a thing and accepting it are so very different things.”
“We’d been born with our souls’ fingers interlocked. What if we’d never let go?”

0 thoughts on “Review Thursday: What’s Left of Me by Kat Zhang”