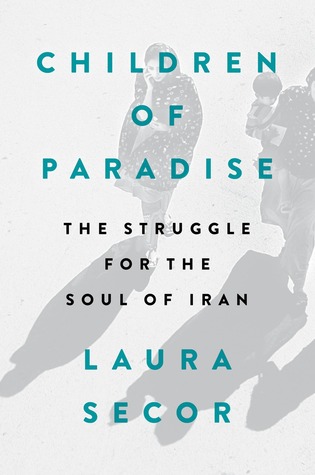 Amazon  Goodreads  Book Depository  Barnes and Noble
Stand alone to date
Goodreads Blurb:
“The drama that shaped today’s Iran, from the Revolution to the present day.

In 1979, seemingly overnight—moving at a clip some thirty years faster than the rest of the world—Iran became the first revolutionary theocracy in modern times. Since then, the country has been largely a black box to the West, a sinister presence looming over the horizon. But inside Iran, a breathtaking drama has unfolded since then, as religious thinkers, political operatives, poets, journalists, and activists have imagined and reimagined what Iran should be. They have drawn as deeply on the traditions of the West as of the East and have acted upon their beliefs with urgency and passion, frequently staking their lives for them.  With more than a decade of experience reporting on, researching, and writing about Iran, Laura Secor narrates this unprecedented history as a story of individuals caught up in the slipstream of their time, seizing and wielding ideas powerful enough to shift its course as they wrestle with their country’s apparatus of violent repression as well as its rich and often tragic history. Essential reading at this moment when the fates of our countries have never been more entwined, Children of Paradise will stand as a classic of political reporting; an indelible portrait of a nation and its people striving for change.”

Review:
Thank you to Penguin Random House for gifting me with a free copy of Children of Paradise: The Struggle for the Soul of Iran in exchange for an honest review!

There are several large topics I’d like to cover in this review so let’s get started!

1.  The research and the content.  The first thing I’d like to mention is how much research went into this.  There are countless interviews and paper sources pieced together with the author’s own experience.  I honestly can’t imagine how long it took to accumulate the knowledge and actually write the book.  This book details exactly what the name implies: the search for the soul of Iran.  If you’ve been following international politics for the past few decades, you know that Iran has always been a tumultuous country.  This book attempts to remedy the gap of knowledge that people have to assist them in understanding Iran as a people, instead of as a single, political entity.  I’m definitely not an expert on Iran so this book helped fill in so many gaps.  You don’t have to have a political mind to read this although you do have to read attentively.  This definitely isn’t a book for light reading.  It’s pretty dense and slightly horrific in some portions.  It’s a book that unsettles you with the truths it brings to light.

2.  The people and the POV.  I really liked the POV of this book.  I’m really bad at remembering what the different names of the types of POV’s are but the POV in this book is really objective and it fit the material really well.  Children of Paradise weaves a spider’s web through different events and political figures, interconnecting everyone which I found especially cool.  The POV allows you to draw your own conclusions about the cause of all of the brutality and sacrifice.  I was actually just talking about this type of POV with a couple of fellow readers and how the choice of POV can influence how you feel about a character exactly how they use music in movies.  By never hearing from the POV of a villain, you view them as two dimensional figures to be beaten.  The best thing about the objective POV in this book is because it does exactly the opposite.  The reader can see how every person is their own three-dimensional person with their own motives that seem good and not evil to them.  This ties in to the types of people the author chose to follow.  They are a diverse mix of higher-ups and ordinary reformists.  I do think it took a while for the author to get into the groove of the book and it takes some will-power to get through the beginning (or it could just be that I have a hard time reading straight philosophy).

3.  An index of people.  One of the things I do wish was included is an index of people and their positions.  Being born and raised in the US, I’m unfamiliar with names that have ties in Middle Eastern nationalities.  Because of that, I found it very hard to remember the names, see their differences from other names, and tie the profession and life to the name.  If you don’t experience this, you won’t have a problem!

The Final Verdict:
A book that is entirely refreshing in the simple fact that it brings to light brutalities and hope that isn’t captured in international media.  I loved the POV and the people that were followed although I found it hard to remember names.
5 stars