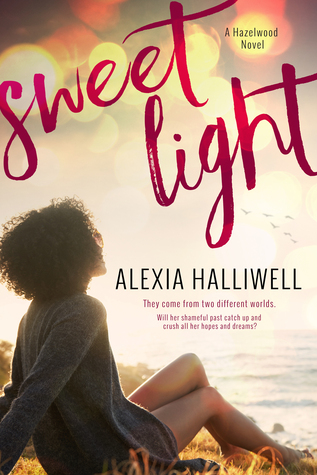 That was one word that summed up Lira Matthews in Kane’s honest-to-god opinion. Actually, calling her hostile was putting it lightly. Belligerent. Vicious. Scathing. All wonderful words that could be used to describe Lira. Never in his entire life had he met a woman like her. From the very moment she stepped into the small town of Hazelwood she intrigued him. It could have been her guarded, distrusting eyes or her sweet softness hidden underneath her tough façade — all Kane knew was he wanted her. To Lira, a Dean’s list medical student, Kane was just another hot mechanic. Sure, he had corded arms that made you gulp in desire and a kindness to him that made your insides melt, but they were from two different worlds. Two worlds that were never meant to meet — they both knew that. That was until Lira’s past catches up with her and she must decide whether she can face her fears or let it consume her whole.”

Review:
Thank you to the author, Alexia Halliwell, and Once Upon An Alpha (the tour host) for gifting me with a copy of this book in exchange for an honest review!
1.  The characters.  So the two main characters in this book are Lira and Kane.  I actually really liked this duo and how they interacted with each other.  They both come from very different sides of life (med student with a haunted past and a hard-core biker mechanic) but they come together perfectly.  I found myself absorbed in their life and I connected with both of them pretty well!
2.  The POV.  There is a dual POV in this book that switches chapter-to-chapter between Lira and Kane.  I really love it when romance books do this because we (as the readers) get to experience the two people falling in love from both sides and you get the whole story rather than just the one-sided version.  Lira and Kane had two very distinctive voices and each chapter is labeled so I was never confused as to whose head I was in.  Quite honestly, I think the POV is the highlight of the book.
3.  The plot: AKA the angst.  Yep, this plot is all about angst and heart-break and confusion on both Lira and Kane’s parts.  While I really liked most of the plot, there were some spots where I was just scratching my head because it felt like something was missing and there was a missed opportunity.  For example, when Kane and Lira first meet, Lira’s car is broken down on the side of the road and she pulls up the hood right as Kane is driving past and Lira is blown backwards and receives burns from the steam that comes out of the engine.  Kane asks her what on earth she thought she was doing but then he never explains to her the proper action to take if there is steam coming out from under the hood.  This may seem like a small thing, but there were like a dozen of these moments throughout the book that caused some hiccups for me.
4.  The romance.  Overall, I did really like the romance.  It was cute while also being adult enough for the ages of the characters and I had plenty of aww moments.  The only thing about the romance is that I think it came on a bit strong when Kane and Lira first meet.  I understand that it’s mostly lust between them at the beginning but pretty much the first thing Kane thinks when he meets Lira is how much he would love to get her into bed.  Did I mention this was when she had just received second-degree burns and was in severe pain?  It definitely isn’t insta-love though, which I ADORE.
5.  The setting.  And the final thing I want to talk about: setting.  This book is set in Australia which I actually didn’t realize until my second read through (which shows you how fast I was reading the first time through!).  I did really like that because almost all of the books I’ve read romance wise are set in the US or England.  Never anywhere else so I liked the change of pace.  This may be because I actually have never been to Australia but I think the author could have done a bit better job with the overall setting.  The microsettings were all described gorgeously and I could picture every detail.  It was the macrosetting that I was a little shaky on (things like the landscape, the weather, etc).
The Final Verdict:
Overall, a very lovely romance with great characters, POV, and romance development.  There were just a few things with the plot and the setting so much that I don’t think I could award a 5 star.  However, a very well-written and well-thought out book!
4 stars