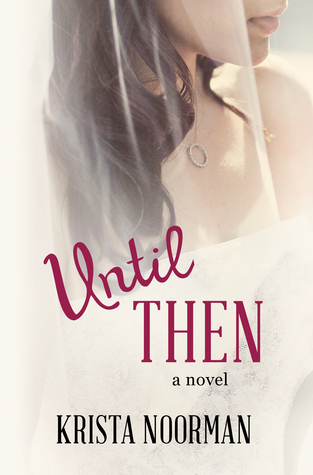 Amazon  Goodreads  Barnes and Noble
Cornerstone #2
Goodreads Blurb:
“Growing up with a distant mother and absentee father, Michelle’s childhood has been far from idyllic. Her only attention comes from her partying friends and the guys who are more than happy to give her the affection she longs for. But when one party goes wrong, Michelle’s family hatches a plan to get her out of Chicago and away from her so-called friends.

College plans are low on Michelle’s priority list, especially with no money to pay for it, until her grandparents offer to foot the bill for her entire tuition. There’s just one catch. Michelle must choose between three schools – all hours away from Chicago and all Christian colleges.

Michelle’s reluctant choice leads her to an unfamiliar place, where she’s faced with new relationships and unexpected decisions that could change her life and her heart forever.

Review:
Thank you to the author, Krista Noorman, for gifting me with a copy of Until Then in exchange for an honest review!
This is the second book in the series.  The first is titled Goodbye, Magnolia which I have reviewed.  To see my review, click HERE.
1.  The religious undertones (pretty prominent ones).  One thing I wanted to mention before I get too far into this review is that this is a pretty religious (Christian) book and one of the main plot points is significantly religious so you have to keep that in mind and, if you’re like me and aren’t terribly religious, you have to keep an open mind.  I was tempted to scoff at some points but it was because of my thoughts towards the religion and not towards the book.
2.  The characters.  That being said, the characters are positively delightful.  Their interactions with each other are just perfect.  We (the reader) get enough backstory on each of them that it’s as if I knew them all in the real world.  I really connected with Michelle as she always felt like she would be the second choice and she wasn’t as good as everyone else that she knew and I’m not a stranger to that feeling.   The one thing I do have to say is the consistent use of ‘gonna’ and ‘wanna’ and those types of contractions.  While I don’t hate them, it’s not something I hear in regular conversation (although it could be part of an accent).
3.  The plot.  Continuing with that line of thought, I really liked how the book was mainly focused on Michelle finding herself and finding something that she really wanted to do that would help other people.  Another fabulous thing about the plot: it gives us a little insight into Michelle and Maggie’s college experience from the first book.  In the first book, Goodbye, Magnolia, the college years are sort of glossed over but this book overlaps that one a bit and takes it from Michelle’s perspective which I thought was really cool and worked out really well.  It made it seem like a more complete story and really connected the two together.  It also allows you to see all sides of what was happening and reasons behind some previous actions.
4.  The romance.  And finally, the romance.  I think the best aspect of the romance plotline was how it was integrated into Michelle finding herself.  While she was happy on her own, she also wants to share her life with someone.  The story of how she found that person and worked through feelings of her own and how she dated several people is really realistic and I appreciated how it wasn’t just meet one person and that’s it.
The Final Verdict:
This is such a wonderfully realistic book with grounded characters and a solid plot line.  I loved it from start to finish.
4.5 stars
Quotes:
“She trusted God, and she believed His plan for her life was far greater than anything she could dream up for herself.”

0 thoughts on “R&R Review Friday: Until Then by Krista Noorman”