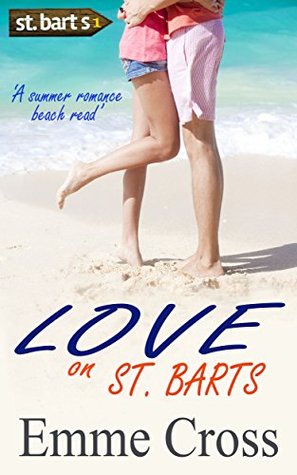 Amazon  Goodreads
St. Barts #1
Goodreads Blurb:
“Everyone says he’s wrong for her, but she doesn’t care
Sunny O’Hara young, pretty, and terribly innocent returns to her childhood home of St. Barts, an idyllic island in the West Indies. She meets Sven Larson, a movie star with a bad reputation for breaking women’s hearts. She falls in love with him and begins a journey of emotional and physical discovery. But has Sven really changed? Can a good woman redeem a very bad boy?

This is the first book in the St. Barts Romance series by Emme Cross. Set on the island of St. Barts, eight square miles of gourmet restaurants, designer shops, yachts . . . and secrets.”

Review:
Thank you to the author, Emme Cross, for gifting me with a copy of Love on St. Barts in exchange for an  honest review!
I really liked this book!  I went in not knowing much and not expecting much but I was pleasantly surprised.  Let me detail what I mean:
1.  The romance.  This is the first topic I want to talk about because it’s such a central part of the story line.  This is a book in the romance genre, after all so the plot was pretty centered around the romance between Sunny and Sven.  Now, it’s pretty predictable from the start what will happen but I’m starting to think that with all books (especially romances).  What wasn’t predictable for me was the ending and how honestly is put at the forefront of their relationship.  I seriously loved that.  I also really love how the author tackles sex in the book.  While I’m not one critique sex scenes, I loved how the author made it perfectly natural, especially when she made sure to write a scene with Sunny and her doctor talking about her options.  I just love how people are finally straightforward about sex and it’ll ultimately lead to a better, safer world (in my opinion).
2.  The characters.  I have to say, I seriously loved Sunny’s character.  She’s so driven and kind to everyone and never takes anything for granted: especially materialistic things.  Sven’s ‘friends’ stand in stark contrast and I really enjoyed that contrast.  I also took appreciation to the fact that there were so many POV’s (I’ll talk about them a little later) so we could really see inside the character’s heads and some characters seemed terrible but the POV’s really helped to cement the idea that everyone is just doing what they think is best and how you were raised and who’s opinions matter to you play a large role in how you act.
3.  The POV’s.  The multiple POV’s were wonderful.  While I was confused a couple times because the changes are only marked by breaks (marked with a line of little dots) and not by chapters, for the most part, they were wonderful.  Every one had a separate voice and separate ambitions.
4.  The plot.  The plot outside of the romance was equally good.  Events sped along flawlessly and everything seemed well-grounded.  While it did drag a bit in the middle (simply because it became more routine), I didn’t feel the urge to put down the book.
The Final Verdict:
The characters are the shining jewel of this novel along with a completely honest romance.  While there were a few snags in the plot and POV’s, overall, everything was flawless.
4.5 stars