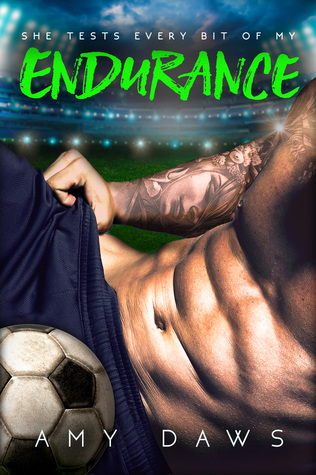 Amazon  Goodreads
Part of the London Lovers universe (but can be enjoyed as a stand-alone)
Release Date: March 16th, 2017 (TODAY!)
Goodreads Blurb:
“Tanner Harris has been busy shagging his way through the ladies of east London, but getting caught by the paparazzi buck-naked with his trouser snake in his hands means he’s sowed his last wild oat.

Review:
Thank you to the author, Amy Daws, for gifting me with a copy of Endurance in exchange for an honest review!
I’m read several of this author’s works and I have to say, she’s perfected the art of drawing the reader in with a good NA romance!
1.  The romance.  I would feel remiss if I didn’t start with this topic.  If you couldn’t tell, the entire book is centered around Tanner and Belle’s romance.  They have such a hilarious relationship and always manage to keep up a banter.  I couldn’t help but laugh whenever they got into a fight or argued about meaningless things playfully.  Something I especially loved was their ability to put aside insignificant arguments for the sake of the larger picture.  While sometimes they can seem rash or argue about weird little things, that’s just their way of bantering and you can tell they’re not serious.  Do be aware that this is a NA romance so the sex scenes are a bit explicit.
2.  The plot.  This is closely tied with the romance (for obvious reasons) but there were some things I wanted to say.  For one, the pace is very well developed and while it can feel slow at times, those times are full of funny dialogue and interesting introspections.  Then, it picks up and you can’t put the book down!  I also love how, in the plot, the author manages to tie all of the books in her collection together, even though they aren’t a true series.  All of these characters exist in the same world but they’re all living their separate lives and the author stays true to their attitudes.  So, if you’re like me and have read most of this collection, seeing the main characters from her other books make cameos is always such a treat!  I just love how the author is essentially creating her own imaginary community in London.
3.  The characters.  This is where the star rating comes in.  While I truly enjoyed reading about this new set of characters, Tanner in particular irked me a bit.  In the beginning, he’s portrayed basically as the typical male celebrity who sleeps with anyone and everyone although it’s hinted that he’s actually just putting up a front consciously.  That point is never brought up again and suddenly, when Belle and Sedg comes into his life, he makes a turn for the virtuous (or more virtuous than he was).  I just wish there was more development into his perception of being a soccer player (footballer over in England) and what it requires of you.  However, I did love learning all about Belle and her best friend Inge and Camden (Tanner’s twin brother) and seeing Tanner’s whole family from a new perspective.
4.  The POV’s.  Speaking of perspectives!  There are two POV’s in this book: Tanner’s and Belle’s which is typical for this author.  I quite like the set up as it allows the reader to see into both sides of the relationship and the impact of certain actions and their feelings towards those actions.  Each POV had a wonderful voice attached to it and I never felt confused between the two (there are also markers at the top of each chapter who is speaking in case you do).  It really assists in creating a deeper connection.
The Final Verdict:
A wonderfully written mature romance (I’d recommend 18+) with stellar POV’s and a clear plot line.  I do wish Tanner’s character was explored more in terms of his thoughts on morality.  Overall, a sweet and hilarious read!
4 stars
Meet the Author:

Amy Daws is a lover of all things British and her London-based love stories bring the incredible city to life on every page. Read all about hot British men, hilarious American heroines, and unforgettable and original ensemble casts that pull out all the feels.
Connect:
Website
Facebook
Goodreads
Newsletter
Twitter
Instagram