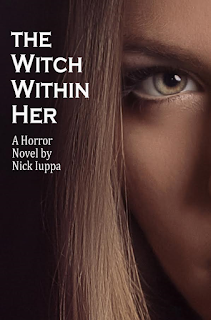 Amazon  Goodreads
Taken By Witches #2
Blurb:
“SEXY, STUNNING, RELENTLESS HORROR
A possessed child is caught in a war between witches!

Spanning centuries of horror and witchcraft, the powerful sequel to Taken By Witches tells how Babcia Czarownica, the greatest of all witches, does battle with far more seductive members of her craft. She must confront a lustful priest, a predatory lover, a vengeful undead beauty, and the unspeakable evil hiding at the top of Rapunzel’s Tower… all to save her beloved grandson and his family from utter annihilation. And she must accomplish all this while sharing the body of an eight-year-old girl.”

Review:
Thank you to the author, Nick Iuppa, for gifting me with a copy of The Witch Within Her in exchange for an honest review!
This book was a bit better for me in terms of character development and plot clarity compared with the first one (see my review HERE).
1.  The characters.  I enjoyed most all of the characters this time around.  Perhaps it’s because I’ve spent more time with them, but there was also more situations presented that revealed their traits and thoughts.  I continued to love Babcia (the ‘evil’ witch whose goal is to protect her grandson, Niko, from pain and suffering and death) and all her complexity.  I loved how she took sometimes unpopular actions to protect him and also showed a soft spot towards his daughter, Joy.  Niko, Joy, and Holly grew on me as well.  Joy especially as we really get an in depth look at her character and how she deals with living with Babcia inside her.  Holly, Niko’s wife, undergoes some difficult decisions (more life related than witch related) concerning her fidelity to Niko and I truly enjoyed the chapters from her POV.
2.  The plot.  I liked the plot this time around much more as well.  It was much more clear what the goals of the witches were concerning Niko and Babcia.  This book is fairly fast paced most of the time so you really have to be ready for it although there are quite a few moments were things slow down considerably.  This book takes place over a shorter time span than the first book and I think the author made the right move as it clarified the main goal and kept me focused on the string of events and the relevancy of each event.
3.  The witches.  We learn a little bit more about the world of witches in this book although it still wasn’t as comprehensive as I would have liked.  I wish there would have been some connection or communication network or history or something that would have demonstrated that the witches are all connected.  As it stands, there just seem to be bubbles of covens and each isn’t really aware of the others.  I did enjoy hearing more about Babcia’s past (she’s 800 years old so there’s some history there!) and how her past influences her current views.
4.  The romance/subplot.  Like I said above, there was a bit of a subplot going on with Niko and Holly’s relationship which I enjoyed.  It tied in some ‘true’ real-world elements that helped cement this story to reality and make it more fleshed out.  Niko and Holly have problems that many real life couples have and struggle with every day.
The Final Verdict:
The characters, plot, and romance are all wonderfully developed and fleshed out.  I do wish there would have been more connection in terms of the witching world although I did immensely enjoy hearing about Babcia’s past.
4 stars
Meet the Author 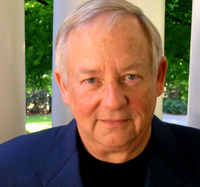 Always wanted to work in the movies. College got me an internship at MGM and I worked on TV specials with Dr. Seuss and Chuck Jones (creator of the Road Runner). Became good friends with both of them. Later wrote for the Wonderful World of Disney. Went to Paramount Pictures where I designed internet entertainment and built Hollywood-style training simulations for the military. But the movie business made it hard to express my own personal creativity. (Too many decision makers). So, I started writing novels so that I could control everything. My first sci-fi novel was about a high tech simulation that was invaded by vampires. Wrote others inspired by Stephen King’s deep, creepy characters. Now I work with a writing partner, John P. Mendoza, and things are much simpler, only one person to argue with. I love developing characters and letting them tell me where the story is supposed to go. These days, my favorite person is Alicia Mann who is the driving force in our current book, Alicia’s Ghost. She’s also central to our upcoming sequel, and the third book in the series, which we are working on right now. Can’t get enough of her. I think you’d like her too. Check her out: www.aliciasghost.com.
Connect:
Goodreads
Website

0 thoughts on “R&R Review Wednesday: The Witch Within Her by Nick Iuppa”