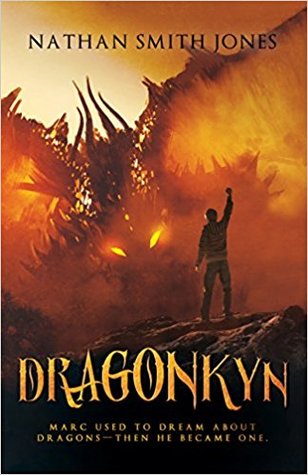 Amazon  Goodreads  Book Depository  Barnes and Noble
Standalone to date (slight indication of a sequel)
Goodreads Blurb:
“Marc Mondragon is your average teenager: always getting into trouble, crushing on the pretty girl in school. But when strange things begin happening to his body, Marc is thrust into a new world where dragons are no longer just fairytales. Now knowing he’s part dragon, Marc joins a group of Dragonkyn who call themselves Sorceron. As Marc discovers new powers within himself, he starts to wonder how much he can really trust his fellow Dragonkyn. After the leader of Sorceron orders the rest of the group to kill Marc, he flees. But when he discovers that people are going to attack the Sorceron, Marc is faced with a dilemma. Will he try to help the Dragonkyn who tried to kill him?”

Review:
Thank you to the author, Nathan Smith Jones, and his publicist for gifting me with a copy of Dragonkyn in exchange for an honest review!
If you’re a fan of Talon by Julie Kagawa, this book is for you!  It’s based around the same kind of concept that there are dragons (or, in this case, people descended from dragons) living incognito in the real world with plenty of fiery battles.
1.  The plot.  This is a largely plot driven book although there is some good character development as well.  There’s a very nice overarching plot line with well-thought out plot points.  The pace is pretty steady: fast in places and slowing down in others.  The author took the approach of the hero’s journey (hero starts off in their normal world, finds something out about themselves, descends into that world, finishes their quest, returns to their previous world with some more insight into life) which worked out very well.  I enjoyed every minute of the action and every scene was fleshed out nicely.  Fight scenes can be especially difficult, keeping the spatial relationships straight and I think this author pulled it off wonderfully.
2.  The characters.  As I said above, there is some mild character development but it’s a largely plot driven novel.  Personally, I wanted a little more character development to facilitate more of a connection with the characters.  You know enough to anticipate actions and shallowly understand each character’s mind, but there weren’t too many deep dives.  There’s a good bit of evolution for the MC (Marc) at the end as he recognizes the significance of his world and his connection to it which is such a great addition.
3.  The writing/voice.  For the most part, I truly enjoyed this author’s writing style.  He kept it concise and fluid, ensuring a smooth transition between dialogue and description, fight scene to rest scene.  During emotionally charged moments, however, the author tended to shift into a third person viewpoint which I found to disrupt my connection with the characters.  For example, when some of the main characters are hurt or otherwise, instead of writing about that experience through their eyes or someone else’s, the author chose to adopt the third person and impersonally describe the occurrence.  Were this not the case, I think the overall character development and my emotional connection with the characters could have been greatly improved.
4.  The dragons/romance.  As I said above, if you’re a lover of the Talon series by Julie Kagawa, you will almost certainly enjoy this book.  The concepts are relatively similar but I never found it to be repetitive.  If you’ve been following me for a while, you know I hold no great love in my heart for the Talon series.  I’ve loved the rest of Julie Kagawa’s work, but that series had too much of a cookie cutter vibe.  However, this book didn’t give me that feeling at all which I was immensely relieved to discover.  I was fully expecting it, but while reading, I just felt curiosity for how this author would structure the dragon world.  I loved the idea of the genetic masking through generations.  It made the concept especially unique and interesting.  Another quick aspect I wanted to mention before I wrap this up is the romance, or lack thereof.  Yes, you heard me, there is NO romance in this book.  There’s some mild references to romance and a crush but nothing is started which I greatly appreciated.  Not every fantasy needs a romance and this fantasy was complete without it.
The Final Verdict:
A solid fantasy with a stellar plot line and an interesting concept.  The connection with the reader could be improved, however, with more interactive and immersive writing in times of stress.
4 stars