This year is moving way too fast.  Seriously.  I’m ridiculously behind on reading because of finals and exams and essays and a thousand other things I need to be doing.  I’m not ready for it to be May yet!  There was so much to be done in April that didn’t get done!  Nevertheless, we have arrive on the doorstep of May and the revolution of the Earth will not slow.  So we beat on.  (if you caught the reference, we can be best friends until the end of time)

The Ugly Teapot by Fred Holmes (#1) (3.5) (Review)
Dragonkyn by Nathan Smith Jones (4) (Review)
Fractured Memories by Jo Schneider (#1) (3.5) (Review)
Among the Flames by Shelby K. Morrison (#2) (5) (Review)
I’m feelings pretty good about the amount of books I’ve managed to read this month!  It’s been quite busy in my neck of the woods but I’ve been generally keeping pace with my Goodreads Challenge which is great.  The Witch Within Her is the next book after Taken by Witches (which I read in March).  The author took more time with character development which really paid off although I wish there had been more on the entire world of witches.  The Awakening was also an R&R book but was in the fantasy genre.  It’s a very unique exploration on the meaning of gods and their role for humanity.  There could have been more practical development, though.  Caraval is a new release and I felt like I just had to read it.  I wasn’t disappointed!  The author does a fabulous job bringing together characters, plot, and setting to create a flawless atmosphere of uncertainty and magic.  The Fate of the Tearling is the last book in the Queen of the Tearling series.  While I was sad to see the series end (it’s one of my favorite series’), I think the author delivered a solid ending.  I had my quarrels with it but in the end, I’m glad the author went in the direction she did.  The Ugly Teapot was another R&R book in the fantasy genre.  I really enjoyed it after I reconciled myself with the realities of the MG genre (less character development and more plot).  Overall it was a great book although the ending was slightly strange.  Dragonkyn was yet another R&R (what can I say, I was productive this month) in the fantasy genre.  I’ve read few books focused on dragons and I think the author did the topic justice.  It has the same feel as Talon by Julie Kagawa although I found it to be less cookie-cutter feeling.  Fractured Memories was an R&R in the fantasy/science fiction genre.  Generally speaking, a very well thought out and executed book.  I do wish there had been more enemy development.  Finally, Among the Flames was my last R&R book this month, also in the fantasy genre.  I read the first book in the series, From the Ashes, a couple of years ago and the author offered the next book to me.  Keeping with the theme from the first book, the author does an absolutely stellar job with the characters, plot line, and setting.  It’s one of the hidden gems of self-publishing!
Rereads: 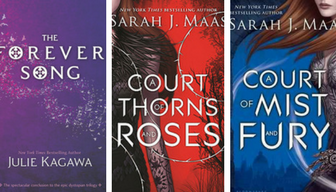 The Forever Song by Julie Kagawa (#3) (4) (Review)
A Court of Thorns and Roses by Sarah J. Maas (#1) (5) (Review)
A Court of Mist and Fury by Sarah J. Maas (#2) (5) (Review to come)
In case you haven’t heard, A Court of Wings and Ruin (the third book in the ACOTAR series by SJM) came out on the 2nd of May ! I participated in a series reread that Cristina @Girl In The Pages hosted and enjoyed every second of it.  It was so great to dive right back into the world and pick up on all of the little bread crumbs that SJM so skillfully leaves behind.  So I reread ACOTAR and ACOMAF in preparation for ACOWAR.  I also reread The Forever Song earlier this month (the third book in The Immortal Rules series by Julie Kagawa).  I read the other two books in the series in late March.  It had been a while since I read the series and I was looking for an old favorite to reread when I saw it on my shelf!  It was wonderful as always 🙂
Currently Reading:

A Court of Wings and Ruin by Sarah J. Maas (#3)
Code Name Verity by Elizabeth Wein (#1)
Poisoned Iris by Cindy Mezini (#1)
Sharp Objects by Gillian Flynn
As of this moment, I’m currently reading these four books.  I preordered A Court of Wings and Ruin and it arrived on time on the 2nd and I tore right into it!  I’m currently 52% in and loving every minute.  I’ll likely have my review up in the next week.  I also got another copy of Code Name Verity from the library (the last time when I started it, I didn’t finish it in time and I had to return it before I was done).  I’m starting again from the beginning and it’s slightly more interesting the second time around so we’ll see how it goes.  I just started Poisoned Iris the other day and am only a chapter in.  I was supposed to have my review up by the end of April but I ended up getting sick and wasn’t able to read or review anything for several days as all I felt like doing was watching Netflix.  I’m getting back on track though!  I also got another copy of Sharp Objects by Gillian Flynn (the same thing as Code Name Verity happened again here).  I’m around halfway through and while I don’t like it as much as Gone Girl, it is keeping me interested.
Life Updates:
This month has been a whirlwind!  Especially near the end of the month.  I caught a nasty cold around the 27th and was bedridden for 3 days in which I didn’t read a single page.  I felt quite unproductive (although I got plenty of Netflix watched).  I’m slightly behind on R&R’s as a result but I’ll get back on track this weekend!
I didn’t see many movies this month but I did see 10 Things I Hate About You for the first time, Live By Night, and The Lives of Others.  I really enjoyed all three!  My favorite is definitely The Lives of Others.  It’s a German film about life in the GDR (which existed during the Cold War and Berlin Wall and controlled East Germany).  It’s entirely in German (with English subtitles) and is utterly fascinating.  Live By Night is set during the Roaring 20’s in the US during the Prohibition (the period of time when alcohol was illegal in the US).  I really liked it!  It really captured the atmosphere of the time period very well.  10 Things I Hate About You is an old chick flick that I had never gotten around to seeing.  It’s adorable and hilarious and perfect for a ladies night in 🙂
As for TV shows and Netflix, I’ve been watching more PLL (both catching up on season 6 and 7 as well as keeping pace with the new airing episodes).  I’ve really enjoyed taking a trip down memory lane and watching the whole series through.  I’ve also been watching The Great British Baking Show Masterclass which is basically the same as The Great British Baking Show except it’s just the two judges, Mary Berry and Paul Hollywood, in the tent and they bake all the things the contestants had to and show you the right way to do it.  I’ve taken a break from Grey’s Anatomy for the time being.  I was spoiled (intentionally!  I asked for the information of my own volition) for the end of season 10 and I just don’t want to get to that episode.  I’ll pick it up and finish it in the summer most likely.  I’m still watching NCIS and it’s also been really cool to go back to the beginning of the series and see them all.  Finally, I’ve been getting into How I Met Your Mother.  I’ve never been one for more reality type TV shows but it’s pretty funny and it’s great for procrastination or a half and hour break in studying!
I still haven’t gotten around to starting 13 Reasons Why and I really hope I can keep this weekend clear so I can watch it straight through and dedicate the weekend to Netflix and reading!  Fingers crossed!

Turning to books, it was a pretty bittersweet moment for me when my preordered copy of ACOWAR arrived in the mail as I was under the impression that the series would just be a trilogy and this was the last book.  Never fear!  SJM is contracted for 3 more full length books and 2 novellas in the series!!!  That piece of news made my year.  Seriously.

There hasn’t been much else happening in my life besides the never ending essays and exams to prep for.  The semester will soon be over, though!
How was your April?  Have you seen The Lives of Others, Live By Night, or 10 Things I Hate About You?  Have you seen any of my TV shows I’ve been watching?  Read any of the books I did or am currently reading?  I hope you all have a lovely May!