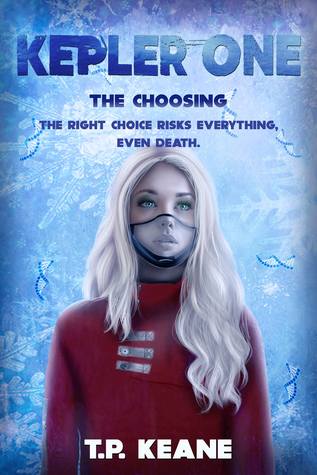 Amazon  Goodreads  Book Depository  Barnes and Noble
Indication of continuation of the series
Goodreads Blurb:
“The radiation on Earth is killing everyone Zoe Ruthland cares about. After winning the Lottery, she is the only tier five citizen given a chance to start over on a new planet. Seen as unworthy, a criminal, many want her to fail. Zoe must survive training, and the other cadets, to secure her place on the Kepler One spacecraft. But something sinister lurks behind the Government’s plans to save humankind and Zoe has no idea that she is an integral part of it; that she is chosen for another reason.”

Review:
Thank you to the author, T.P. Keane, and their publicist for gifting me with a copy of Kepler One – The Choosing in exchange for an honest review!
I really enjoyed this book!  I read in all in one sitting in just 3.5 hours which speaks for itself.  It wasn’t completely flawless but enjoyable nonetheless.
1.  The characters.  This is the only complicated element for me.  On one hand, the author has taken steps to develop each character.  Their background, their personality, their actions, everything.  For the most part, this effort was entirely successful.  The characters jumped off the page which is a wonderful testament to the author’s skill and their dedication to editing.  On the other hand, there are several prominent instances where this failed.  The main character, Zoe, had more lapses than the other characters (and they are more prominently displayed as the only POV is her perspective).  Especially near the end, she acted out of character in a spectacular fashion on several occasions.  She would randomly get angry and barge in places without thinking and would act incredibly irrationally.  This did not line up with her background of growing up in the toughest sector (the world is separated into five sectors, the fifth being the most dangerous, and Zoe grows up in the fifth).  You’d think growing up with that type of environment, you’d learn to temper yourself just a bit or at least have a more critical mind to pick apart situations and assess but Zoe doesn’t seem to have any of these traits.  I did enjoy her character, nonetheless, and she provided some interesting discussion on leadership (more on that later).
2.  The plot.  As I mentioned above, I read this all in one go and was entirely engrossed.  This is 75% due to the plot and 25% due to the characters and my interest in their development.  While the characters are fascinating, the plot truly shines in this novel.  Taking a cue from all other successful novels, the author made sure to include an overarching plot line (the goal of getting to a more habitable planet) as well as secondary ones (Zoe and Nathan’s exploits, Zoe’s journey, and the little tests along the way).  Think a combination of The Hunger Games, Throne of Glass, and Passengers (the movie, not the book).  There is a selection process to determine who will be among the 15 people to go on the ship and travel to the selected planet that is hundreds of light-years away.  This selection process isn’t exactly friendly but isn’t to the level of The Hunger Games.  This provides tension which drives everything allow that much more smoothly.
3.  The romance.  Yes, there is a romance and yes, there is a love-triangle.  I’m pleased to report, however, that the romance doesn’t overtake the plot in any way and the love-triangle itself isn’t made too apparent until a couple of occurrences near the end.  Nothing to fret about.  I do hope that the author will keep in mind that romance is a secondary plot line in the next book as well.  The romance doesn’t develop all that much because of Zoe’s character which I loved as it stays very true to her personality and thought process.  All in all, I think the author is very good about sticking to the limitations of his characters in this instance.
4.  The writing.  I truly enjoyed this author’s writing style.  They included some lyrical language but were also careful about making sure everything flowed well.  I can appreciate metaphorical language but there’s definitely a time and a place for it and I think the author took the proper steps to ensure this was the case.
5.  The concept/idea.  This is also something I enjoyed immensely.  I loved how the author took the time to go through some of the science (I am by no means an expert in space travel and the bending of space-time in the creation and exploitation of worm-holes by the way) to make everything seem that much more believable.  The author also took the time to really flesh out the pressures of the mission (basically the survival of humanity).  I haven’t read too many books related to space travel that I’ve enjoyed (basically The Martian) so this was a lovely read for me.
The Final Verdict:
All in all, a truly enjoyable novel.  While there were several distinct instances where characters acted extremely strangely for themselves, they were developed well and the plot shone.
4 stars

0 thoughts on “Review Wednesday: Kepler One – The Choosing by T.P. Keane”