It’s that time again!  Honestly, I can’t believe how fast this year is flying by.  There’s so much I have to do by the end of the year, not to mention the end of the semester (which ends in the middle of December).  But we shall power on!  This month has certainly been interesting in terms of reading.
Statistics:
Number of Pages Read: 2,807
Total Books Read: 8Rereads: 3Reviews Posted: 2Distribution of Ratings:5 star: 14-4.5 star: 53-3.5 star: 12-2.5 star: 11-1.5 star: 0 Number of Authors Read: 8Number of Series Books Read: 5 Number of Stand-alones: 3The Books:
Reads: 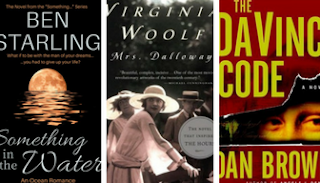 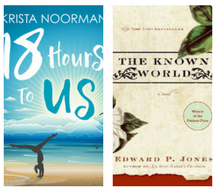 I’d say it’s been a pretty good month!  Again, a good portion of the reading I did was for an English course I’m taking.  I read by The Known World and Mrs. Dalloway for that course.  However, I did get two R&R’s done this month and still managed to read a book I’ve been wanting to for a long time (and I want to rewatch the movie soon as well!): The DaVinci Code.  Something in the Water was actually very enjoyable.  I started out slightly confused because the book has so many different elements worked into it (the fantasy in particular threw me a little) but by the end, I thoroughly enjoyed it.  Mrs. Dalloway was the lowpoint of the month.  I had to read a slew of Virginia Woolf in my high school days and I think I’m all Woolfed out.  I just can’t really get into her writing anymore although I generally enjoyed the story.  It’s so much more comprehensible when you understand the organization that Woolf worked in with the tolling of the clock.  The DaVinci Code was my fun read for the month as it’s been siting on my shelf this whole semester, taunting me.  I picked it up at my local thrift store when I was just passing by and saw it.  I love browsing the shelves at my thrift store because you can find great gems for a fraction of the price.  The book itself was so great and I can see myself rereading it in the near future.  I’m especially interested to see just how much of this is actual speculation that’s taking place in the academic world.  I received 18 Hours to Us as an ARC from the author (I’ve been working with Krista Noorman since her debut novel was published in 2014) and I really enjoyed it!  Noorman tends to write about fluffy, clean romances (think Kasie West) and I’ve never failed to enjoy them.  Finally, I read The Known World for that English course I’m taking this semester and while I did enjoy it, I think I wouldn’t have enjoyed it as much if I was just reading it on my own without the intense analysis. 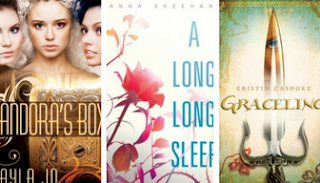 I was a little more in the mood for rereads this month.  Once I get started on rereading, I just kind of keep picking up book after book, even if I have other stuff to be doing!  It’s kind of dangerous, actually.  I did lower my rating for Pandora’s Box mostly because I just didn’t like it as much as I used to (like the rest of the series).  I’ll be doing a summary post on that soon. 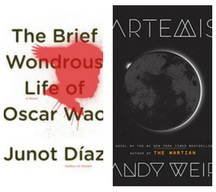 The Brief Wondrous Life of Oscar Wao is the last book I’ll read for my English course this semester!  I’m enjoying it so far (mostly because it has some Spanish phrases in it which means I get to practice my Spanish).  I ordered Artemis and it just came a couple of days ago so I’m just starting to dig into it!  (note: I just finished this but when I made this graphic I was still in the middle of it.  I’m too lazy to make another graphic though…)  I was also reading It by Stephen King last month and I have yet to finish it but I’m thinking I’m going to wait until finals are over and then I’ll just binge it all in a day or two to finish it up once and for all.  I really want to see the movie once I move again so that will happen!

Life Updates:
This month has been such an intense month!  The first few weeks were jam packed with essays and exams and presentations and then, all of a sudden, Thanksgiving came along and saved me.  I did go Black Friday shopping with my mom which was really fun and I ended up getting a few things.  My Christmas presents this year are actually going to be done on time (flashback to last Christmas when I pulled an all-nighter on Christmas Eve to get everything done)!  Overall, though, there hasn’t been too much excitement.  I did see quite a few new movies (and a few rewatches) and I’ve found some new music to listen to!  I’ll be doing a Music Monday next Monday so I’ll put more there but here are some of my favorites:

Barbies – P!nk
I love the nostalgic nature of this song and P!nk always has awesome beats!
Walk on Water – 30 Seconds to Mars
This music video is GORGEOUS!  Seriously, especially if you live in the U.S., you know what kind of year we’ve had and this video is exactly what I needed.
Gorgeous – Taylor Swift
This is my favorite song so far from Taylor Swift’s new album!
Santa’s Coming For Us – Sia
I couldn’t not put a Christmas song in here!  I do like traditional Christmas songs, but I also love the Christmas albums some artists put out with reworked Christmas songs, too.
As for movies, I have a whole list this month!

I’ve been watching Hallmark’s Countdown to Christmas if you couldn’t tell!  That includes anything with the word ‘Christmas’ in the title.  They’ve all been very sweet and adorable.  As for the others, it’s been an interesting month!  Shin Godzilla is a Godzilla movie that was made and released in Japan.  I love watching movies from other countries and this is no exception.  I think they did a good job with it, with the exception of the appearance of the monster.  Just look it up and you’ll see what I mean!  Everyone in the theater burst out laughing when Godzilla first appeared.  I’d definitely watch it again, though.  Spider-Man:Homecoming was… interesting.  I still haven’t decided if I like it or not.  I love how they tied it in with The Avengers.  I’m such a fan of Marvel (except for the fact that Black Widow is literally the only female superhero and she doesn’t have a solo movie yet which is a TRAVESTY) and I love what they’re doing with the whole combined world/storyline thing.  It is kind of weird to have Spider-Man be a part of that world, though.  I think they did a good job with the visuals and script and such!  I did see the new trailer for the next Avengers movie and Dr. Strange is in it which I’m SO excited for!  Benedict Cumberbatch is lovely.  War for the Planet of the Apes was such a soul-crushing movie.  I’ve really liked the series, and don’t get me wrong, I loved this movie.  It was just so sad to see what was happening with the human situation and how heartless people can be when they think their survival is at stake.  I could definitely see that happening too which makes it worse.  It’s such a great conclusion even though it is sad.  The Dark Tower was a bit anticipatory for me.  I’ve been reading the series for the past few years (I’m hoping to actually pick up the next book soon – I’m on the… third(?) book I think).  I did like it although they pared down on the story line a bit which I do actually approve of.  There are certain things that just wouldn’t do well in a movie and the drawn out and abstract nature of this series is one of those things.  The casting is stellar!

As for TV shows, I’ve been rather obsessed with Criminal Minds and have polished off 3 seasons.  I seriously have an addiction.  Also, Netflix has another season of The Great British Baking Show which made my year!  I LOVE that show and when I ran out of seasons to watch (there were only 3 previously) it was devastating.  I did hear that only Paul Hollywood remains after the whole network switch which is disappointing.

And that’s mostly it!  It’s been a rather busy month with university and seeing family and all so there hasn’t been much in the way of exciting travel or anything.  I’m enjoying fall, though, and am looking forward to winter break!

So that’s my November.  How has yours been?  Have you seen any of these movies or read any of these books?  What did you think of them?  Have you been watching Hallmark’s Countdown to Christmas?