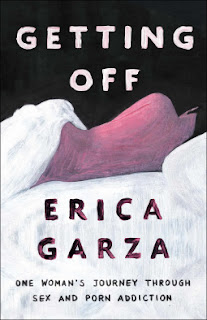 Review:
Thank you to Simon & Schuster for providing me with an ARC review copy.  All opinions expressed are my own.
To preface, I’ve never reviewed anything like this before.  Normally, I review relatively clean books and I’ve never reviewed anything that directly confronts sex and porn like this book does.  When a representative from Simon & Schuster approached me for a potential review, however, I felt that it was an important topic to take on.  I’d also like to mention, that if you are someone who suffers from this same addiction, a trigger warning is in order.  I would also suggest 18+.
1.  The content (the journey itself).  The first portion of the blurb is beyond true.  This book offers a good long look through a window into the house of sex addiction and it’s probably a house not many have seen unless they’ve become trapped into the house themselves.  Quite honestly, I found myself crying at one point because what the author has chosen to reveal is heartbreaking.  Personally, I don’t know too much about addiction of any kind so the feelings the author expresses are all new to me.  She walks you through her shame and guilt and feelings of worthlessness which is so hard to read.  I think Garza did a fantastic job of illuminating her personal struggle through these feelings and her journey of coming to understand herself and accept herself.
2.  The cultural implications.  One aspect I’d like to mention before I get to far into this review are the cultural implications of a woman addressing her own sex addiction.  As Garza states in the book (and backs up with evidence), sex addiction is often seen as a man’s problem and one that isn’t really taken too seriously (at least, not as seriously as drug or alcohol addiction) and it isn’t as nearly widely publicized for many reasons.  Our culture today is still struggling to break free of the idea that only a man’s pleasure counts during sex and sex is predominantly a man’s world.  This novel addresses this in several scenes which I found to be particularly relevant.
3.  The big picture.  The only large issue I had with the book was, in fact, the big picture.  The blurb promises a book that will link the struggles of one woman to the larger issue of sex addiction itself and how the Internet plays into this.  While Garza does refer to several studies and mentions these big picture ideas once or twice, I found the supposed connection flimsy and inadequate.  Her personal narrative is compelling, but her connection with the rest of the puzzle wasn’t enough for me.
The Final Verdict:
Though this is different from anything else I’ve read, I’m glad to have experienced it.  The narration is poignant and very near flawless though the focus seemed to be only on a single puzzle piece.
4 stars