For my birthday last year, my parents gifted me with about 35 Agatha Christie mysteries of which I’ve made it my mission in January and February to read!  I’ve done six other parts to this series, all of which I’ve linked below.
Part One
Part Two
Part Three
Part Four
Part Five
Part Six 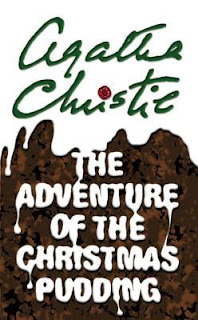 The Adventure of the Christmas Pudding – Agatha Christie

Blurb:
“Agatha Christie’s seasonal Poirot and Marple short story collection, reissued with a striking new cover designed to appeal to the latest generation of Agatha Christie fans and book lovers.The Adventure of the Christmas Pudding (a.k.a The Theft of the Royal Ruby)The Mystery of the Spanish ChestThe Under DogFour and Twenty BlackbirdsThe DreamGreenshaw’s Folly”

Review:
Personally, this just wasn’t one of my favorites.  It’s a book consisting of several short stories (5 to be exact) which means that there’s far less time for the investigation so it’s a lot simpler to solve.  Each of the stories still had a creative ending, but I prefer my mysteries to be longer and more complex.  However, this is a great book if you like to read just a chapter or two before bed because there’s a nice ending point that doesn’t involve the end of the book and four hours of reading!  I’d have to say my favorite out of all the short stories would have to be The Mystery of the Spanish Chest with The Under Dog coming in a close second.  The first four are Hercule Poirot cases and The Dream is a Marple case.
The Final Verdict:
If you’re one for short and sweet mysteries during shorter periods of time, this is your book.  If you prefer your mysteries well-journeyed, a full length book would be better suited.  I am the latter.
3.5 stars 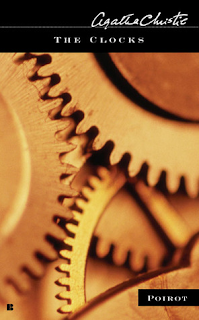 Blurb:
“When a young secretary, Sheila Webb, is sent to the home of a blind woman on an errand, she is horrified to discover a dead man behind the couch, surrounded by four clocks that have all been stopped at 4:13. The owner arrives home and denies that the clocks belong to her, the deceased’s business card turns out to be a fraud, and a woman shows up claiming to be the dead man’s wife. There is only one man who can unravel this complicated case: Hercule Poirot.”

Review:
This is another Agatha Christie that just wasn’t one of my favorites but I still enjoyed it nonetheless.  Hercule Poirot takes more of a backseat to this investigation and is merely spoken to on a consultation basis.  Personally, I enjoy it much more when he is immersed in the place where it took place and I love hearing his conversations with various people.  Without him, I was still interested by the mystery and the ending is certainly well-thought out and very very subtly foreshadowed with clue drops here and there.  This mystery has just the right amount of bizarre (mainly the clocks and the location) to keep you interested throughout the novel though I did figure out the answer before I normally do.  Christie experiments a bit as well with a different POV: first person.  Normally, she does a limited third person which I’ve come to love, especially with mysteries, and I just couldn’t get used to the change.  It felt awkward to me after so long with third person.
The Final Verdict:
A satisfactory and enjoyable mystery, but not one of Agatha Christie’s best.  Mostly, I missed the continual conversation of M. Poirot.
3.5 stars

Hallowe’en Party – Agatha Christie
Hercule Poirot #39
Rating: 4 stars
Blurb:
“A teenage murder witness is drowned in a tub of apples… At a Hallowe’en party, Joyce—a hostile thirteen-year-old—boasts that she once witnessed a murder. When no-one believes her, she storms off home. But within hours her body is found, still in the house, drowned in an apple-bobbing tub. That night, Hercule Poirot is called in to find the ‘evil presence’. But first he must establish whether he is looking for a murderer or a double-murderer…”
Review:
I quite enjoyed this installment of the Hercule Poirot series.  Ariadne Oliver is also a part of this novel although slightly more in the background.  I always enjoy seeing Poirot and Oliver work together and it’s been made better by the fact that I’ve been reading the books in order and have seen their acquaintanceship grow into a friendship.  This book has mildly the same tune as After the Funeral (#31) where the instigating factor is the fact that a strategic person claims that someone else was murdered and they know for sure that it was so.  I enjoyed that element in that book and I enjoyed it in this one as well.  There is a lot of introspection when Hercule Poirot goes walking and thinking and for once we are privy to his stream-of-consciousness which doesn’t normally happen.  Honestly though, I wish Christie had kept Poirot’s mind somewhat ambiguous although this technique does help to demonstrate Poirot’s age (he’s getting rather old in these books).

The Final Verdict:
Interesting and absorbing although I wish we didn’t get so much of Poirot’s inner monologue.
4 stars

Have you read any of these?  What did you think of them?  Do you enjoy Agatha Christie mysteries?

0 thoughts on “Agatha Christie Review Round Up: Part Seven”