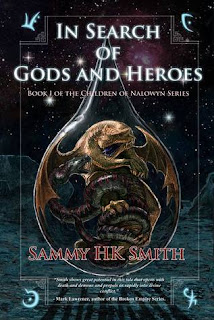 Amazon  Goodreads  Book Depository  Barnes and Noble
Children of Narowyn #1
Blurb:
“Buried in the scriptures of Ibea lies a story of rivalry, betrayal, stolen love, and the bitter division of the gods into two factions. This rift forced the lesser deities to pledge their divine loyalty either to the shining Eternal Kingdom or the darkness of the Underworld.When a demon sneaks into the mortal world and murders an innocent girl to get to her sister Chaeli, all pretence of peace between the gods is shattered. For Chaeli is no ordinary mortal, she is a demi-goddess, in hiding for centuries, even from herself. But there are two divine brothers who may have fathered her, and the fate of Ibea rests on the source of her blood.Chaeli embarks on a journey that tests her heart, her courage, and her humanity. Her only guides are a man who died a thousand years ago in the Dragon Wars, a former assassin for the Underworld, and a changeling who prefers the form of a cat.The lives of many others – the hideously scarred Anya and her gaoler; the enigmatic and cruel Captain Kerne; the dissolute Prince Dal; and gentle seer Hana – all become entwined. The gods will once more walk the mortal plane spreading love, luck, disease, and despair as they prepare for the final, inevitable battle.In Search of Gods and Heroes, Book One of Children of Nalowyn, is a true epic of sweeping proportions which becomes progressively darker as the baser side of human nature is explored, the failings and ambitions of the gods is revealed, and lines between sensuality and sadism, love and lust are blurred.”

Review:
Thank you to the author, Sammy H.K. Smith, for gifting me with a copy of In Search of Gods and Heroes through a common connection.  All opinions expressed are my own.
Before I say anything else, let me tell you I spent a good hour agonizing over this book and what to rate it.  I’ve never felt constrained by my rating system before but I definitely do now!  I’m just so conflicted.  On one hand, the complexity that this author built up in 420 pages is astounding but on the other, there are clear areas of improvement kept this from perfection.  If you couldn’t tell, I have a lot to say about this book so strap in!
1.  The characters.  This is the area that I was most conflicted by.  There is a healthy cast of characters that each have their own feelings and perspective.  I loved getting to hear from each of the characters and their interactions are spot on.  The issue I had, though, is the lack of backstory.  It’s hinted at (and briefly explained) in various portions of the novel in a broad, sweeping sense, but not on a personal note which kept the character’s themselves feeling slightly vague and shadowy.  The characters were anything but flat (Nathan especially!) but they are very murky which really bothered me.
2.  The romance.  I’m not sure how I feel about this.  There’s a very clear love square defined by about the first third of the book (and by love square I mean three guys interested in one girl).  I’m very much not a fan of love triangles that are done in the wrong way but if they raise good questions for the characters, then I’m all for it.  In this book, I don’t see that happening very much (the two closest guys are both doing the typical ‘I want to love you but I’ll corrupt your soul/I swore an oath of protection and not love’ deal which isn’t very valuable.  There is a question of lineage brought into play, though, that makes it more valuable for the MC (Chaeli).  So overall, the romance is a meh for me.
3.  The setting/world.  I have a complicated relationship with this aspect as well.  While the world is lush and rich, it isn’t terribly well-defined, like the characters.  There’s a map in the beginning which was truly appreciated but I do wish there was a little more of an introductory period or a bit of help from the internal dialogue of the characters to explain some things (like the orientation of the different countries and which ones were countries and which ones were just cities and what land forms are where; that sort of thing).  It’s all included in the map, but it’s nice to be reminded of these things now and again so you don’t have to keep flipping back to the map.  This is entirely personal preference but I’m kind of an impatient reader.  Despite this, I think the world-building is the author’s strength in this novel.
4.  The POV’s.  This is one of my favorite parts of the book (along with the world building).  We are given so many different perspectives that reveal our unreliable narrators and their personal lenses that they see the world through.  The perspectives aren’t labeled but you’re able to figure out who is speaking within a paragraph.  The voices are distinct although some of the character vagueness does carry over.  Mostly, I enjoyed how many angles of the story we were able to see.  I’ll talk about this in the next section, but it also helped move the plot along and keep the tension up.  If you just saw the story through only a few of the perspectives, the plot wouldn’t be as engaging because there is so much happening behind the scenes.  The book is slightly political which means there’s plenty of backstage maneuvering.
5.  The plot.  And last but not least, the plot.  As I said above, once you get past the halfway point, the urgency seems to die down from a couple of the POV’s but it picks up in others which keeps it going.  There’s the typical action plotline, the political plotline, the romance plotline, the godly plotline, and the list goes on and on.  The author does a stellar job of keeping them all in balance and weaving them together so you don’t get too overwhelmed and everything ties together nicely.  You have to use a little brain power and surmising but take it from someone who enjoys mysteries on a regular basis: it isn’t too hard to keep up and any inferences you make are carefully guided by the actions of the characters.  It may not seem like the author is leading you in a certain direction until you realize that you ended up exactly where she wanted you to be.  I admit, it sounds strange, but it’s exactly what mystery writers do when they write their endings.
The Final Verdict:
While I do have a complicated relationship with this book, the plot, POV’s, and world-building are stand-outs with their complexity and finesse.  I do wish the characters and the overall orientation of the world were a bit more defined.
3.5 stars

0 thoughts on “Review Wednesday: In Search of Gods and Heroes by Sammy H.K. Smith”