Today’s Topic: Favorite/Least Favorite Title
Again, I’m going with only reads for this (not counting rereads).
Best:
I had a bunch of four stars (nope, no five star books in June!) but I think my favorite would have to be:

Right Under Your Nose by Holly Tierney-Bedord
Standalone (novella length)
Released: 2015
Rating: 4 stars (Review)
Blurb:
“Ariadne Daniels seems to have it all: A successful career as a pastry chef, a Victorian home in a trendy neighborhood, and her dedicated boyfriend Scott who she’s been with for years.Her life is great until the day she stops by Scott’s apartment to surprise him and finds out that he’s not so dedicated to her after all. Shocked and too depressed to celebrate, she decides to skip Christmas. Her best friend Jess does his part to convince her otherwise, but Ariadne’s determined to wallow in her misery, at least until spring.Life has other plans for her, however. Some helpful meddling from a new friend at a local bookstore, along with some questionable behavior on the part of Jess’s girlfriend, turn Ariadne’s ho-hum holiday plans on their head.”

I may have read this in the wrong season but I still enjoyed it immensely.  Normally, I can’t bring myself to care about characters in a novella because it’s so short and there’s so little time to build them up while also building a plot and a world.  However, the author certainly accomplished it which made this the perfect little book to end a reading slump!

Worst:
I actually had a one star book this month (synonymous with DNF), surprisingly.  If you’ve been following me for any length of time, you’ll know I very, very rarely DNF books which is why this was so disappointing. 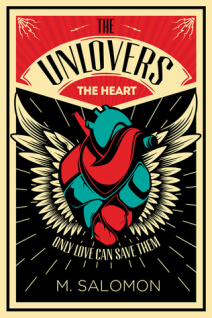 The Unlovers by M. Salomon
The Heart #1
Released: 2016
Rating: 1 star (Review)
Blurb:
““In a world where love is for sale, everything else lacks value.”In London, 2040, love is known as OX2 and it has a price, a price that not everyone can pay. Sophie Quinn is lucky, recently she has moved with her family to Upper Thames, the most favored part of the city. They can consume OX2 whenever they want, which enables them to preserve their emotional ties and carry on a relatively normal life; she goes to college and her relationship with James is at its best. However, something is threatening her apparent happiness. The sale of OX2 has generated new social classes and sociopolitical interests that will put her perfect world in danger. Sophie will have to choose whether to fight against love or for it; the days go by, the hours count and her own love has a price. Will she be willing to pay that price in spite of the consequences?”

I actually think it’s a very good thing that this is currently unavailable.  I received it for review, after it had been translated from Spanish to English (the publicists were looking to expose it to another market) and that was, in fact, it’s main issue.  It’s like they just stuck the whole book into Google Translate and didn’t read it over before publishing it.  Bottom line: it may be just fine in Spanish, but in English?  Nope.
Have you read either of these?  What did you think of them?  Have you read many translated books?  What books were your favorite and least favorite in June?  Make a post and link up down below!
Next Week’s Topic: Favorite Book That’s the Most/Least Quotable