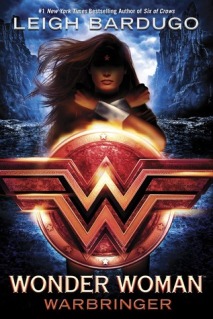 Blurb:
“Daughter of immortals.Princess Diana longs to prove herself to her legendary warrior sisters. But when the opportunity finally comes, she throws away her chance at glory and breaks Amazon law—risking exile—to save a mortal. Diana will soon learn that she has rescued no ordinary girl, and that with this single brave act, she may have doomed the world.Daughter of death.Alia Keralis just wanted to escape her overprotective brother with a semester at sea. She doesn’t know she is being hunted by people who think her very existence could spark a world war. When a bomb detonates aboard her ship, Alia is rescued by a mysterious girl of extraordinary strength and forced to confront a horrible truth: Alia is a Warbringer—a direct descendant of the infamous Helen of Troy, fated to bring about an age of bloodshed and misery.Together.Two girls will face an army of enemies—mortal and divine—determined to either destroy or possess the Warbringer. Tested beyond the bounds of their abilities, Diana and Alia must find a way to unleash hidden strengths and forge an unlikely alliance. Because if they have any hope of saving both their worlds, they will have to stand side by side against the tide of war.”

Review:
This book.  Y’all.  THIS BOOK.  I haven’t had a five star book in a long time and I’m so glad this book was the one to break the spell.  It’s just SO LOVELY.


“Sisters in battle, I am shield and blade to you. As I breathe, your enemies will know no sanctuary. While I live, your cause is mine.”

1.  The characters.  Okay so can I just say that Diana is so fierce.  She is one of my favorite characters to date.  The only reference point I have for Wonder Woman is the movie which I saw before reading this and I have to say, I like Diana so much more in the book.  Bardugo takes such pains to display both the invulnerable warrior princess and the uncertain not-yet-an-Amazon and it works so well within the confines of a superheroine discovery book.  Diana is faced with real battle situations outside of her home on an island and she faces very real growing pains (aka all the doubts and cracks) that is normally absent in comparable stories.  I also loved how Diana and Alia’s relationship progressed throughout.  They start out as an unlikely pair that is stuck together to sisters in battle.  It’s such a lovely arc that makes me want to pick up the book again and reread it.  The supporting cast of characters is equally good.  Nim and Theo make excellent ‘warriors’ and they’re not forgotten in terms of character development.  The villain(s) is a little trickier.  I wish there was a little more clear elaboration on the final villain (to all those who have read it, WHAT ON EARTH WAS THAT???).  It came out of nowhere and the evidence and explanation was a bit scant. However, the villains that the novel starts out with are articulated well.

2.  The plot.  Like I said, the only reference point I have for this story is the movie which focuses on an entirely different story of Diana.  In the beginning, I was a little fixated on how this fit into the movie’s events (which it really doesn’t at all) but if you can let that go and just go along for the ride, it’s excellent.  This is, quite literally, an on-the-edge-of-your-seat kind of plot structure and I couldn’t bear to put it down.  It’s a classic hero’s journey plotline structure which really works for the material (seriously, why fix what clearly isn’t broken).  The ending was a little… sappy for my taste but I was satisfied with it nonetheless.


“I imagine all wars look the same to those who die in them.”

3.  The world.  The majority of the book is based in the modern world so there isn’t much world building that needed to be done but what I loved the most about this aspect is Diana’s reaction to modern world sayings and actions (the ‘shotgun’ scene, anyone??).  They made me laugh each and every time while also providing the perfect contrast between the two worlds.  What knowledge we do get about the Amazon’s island is very sufficient and lends itself well to the imagination.

4.  The romance.  This is the one element I could have done without.  There’s just a bit of two budding romances (and a third in the final pages) but I thought it really wasn’t necessary and provided only a blip of action.  There was only a small microplot dedicated to each and while I thought it was appropriate in the beginning of the novel, the events that took place at the end weren’t really my taste.


“If you cannot bear our pain, you are not fit to carry our strength.”

The Final Verdict:
A beautiful, majestic story of a superheroine learning to trust herself with a healthy dose of humor and suspense.
5 stars

Will I continue with the series?
Of course how could you even ask that question??  Each of the books in the series is penned by a different author about a different DC superhero but nonetheless, I’m interested to see what the others have in store (although I suspect Wonder Woman will be my favorite at the end because she is my favorite superheroine to date).

Talk to me!  Have you read this?  What did you think of it?  Were you also a little fixated on the differences in plot between the book and the movie?  How do you feel about the romance(s)?