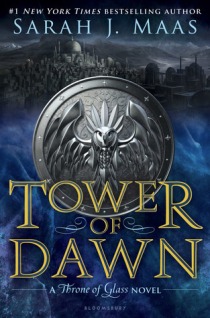 Blurb:
“In the next installment of the New York Times bestselling Throne of Glass series, follow Chaol on his sweeping journey to a distant empire.Chaol Westfall has always defined himself by his unwavering loyalty, his strength, and his position as the Captain of the Guard. But all of that has changed since the glass castle shattered, since his men were slaughtered, since the King of Adarlan spared him from a killing blow, but left his body broken.His only shot at recovery lies with the legendary healers of the Torre Cesme in Antica—the stronghold of the southern continent’s mighty empire. And with war looming over Dorian and Aelin back home, their survival might lie with Chaol and Nesryn convincing its rulers to ally with them.But what they discover in Antica will change them both—and be more vital to saving Erilea than they could have imagined.”

Review:
I know, I know, I’m so behind!  But I was so wary of starting this when the next one wasn’t out yet!  SJM has been developing a bit of a cliffhanger streak, after all.

1.  The characters.  I thoroughly enjoyed meeting all the new characters, Yrene and Sartaq especially (healer and prince respectively) and I found myself deeply invested in their personal story lines early on.  I went into this book disliking Chaol mostly because of his stiffness and general unwieldiness as a character however, given the extended time we spend in his head in this installment, he started to grow on me.  Or at least I started to develop a deeper understanding of his character.  I would also echo that sentiment with Nesryn.  When we left her in QoS (#5), she was still relatively an outsider and we really didn’t know that much about her and throughout the course of this book, we also really get to dive deeply into her character and her motivations.

“He’d almost told the princess that she could keep Hellas’s Horse, but there was something to be said about the prospect of charging down Morath foot soldiers atop a horse named Butterfly.”

2.  The plot.  This is mostly a book focused on self-discovery and reconciliation which is something that’s a little different than most of the other books (exempting HoF) and consequently a large portion is predominantly character-driven.  However, the author does insert quite a bit of plot drama including the continued Valg pressures.  This interweaving is very well done and feels incredibly seamless.  This book also clarified the situation in leaps and bounds.  After the madness of EoS and QoS, the waters were a bit muddy and this novel really helped clear away the debris.  Mostly, this comes from the step back from the main continent where Aelin and the rest of her cadre is situated.  Stepping back from the situation and viewing it from outside eyes, while initially off-putting (who wants to step away from Aelin?), is extremely helpful in this regard.  As a sort of side note, anyone the connections between novels is perfection.  There are so many through lines that are brought to light that trace all the way back to Assassin’s Blade.


“I will cherish it always. No matter what may befall the world. No matter the oceans, or mountains, or forests in the way.”

3.  The world.  I haven’t brought this up for a while in my reviews for this series but I feel it’s appropriate given that we’re able to explore a whole new continent.  I wish I could say I had a clear picture of the people that inhabit the southern continent but I only picked up a fuzzy, slightly out-of-focus picture.  While it’s good for a single book, I wish there would have been more.  We get a bit of world-building but I don’t think there’s enough seeing if you know what I mean.  We’re told it’s a peaceful country, but we don’t see that.  The only setting where I really got a strong sense of place was the mountains where the ruks and rukhin live.  The traditions and attitudes there are very well placed but as for the rest, there were only a few hints here and there.

4.  The romance.  I’m not going to say too much on this front because of spoilers but I will say that I loved both of the romances that developed and how they did so.  The author was very true to her characters.


“A gift. A gift from a queen who had seen another woman in hell and thought to reach back a hand. With no thought of it ever being returned. A moment of kindness, a tug on a thread.”

5.  Ableism.  I feel like I have to address this as it’s such a huge topic throughout the course of the book.  Chaol and Nesryn go to Antica for two reasons: first for the armies, second for Chaol’s legs.  In QoS, Chaol was paralyzed from the hips down in the glass castle battle and the best healers left in the world reside in the Torre in Antica.  Chaol goes through so much while being healed, all the while fighting the instinct to view himself as broken and not himself.  While this is remedied in the end (the language), I’m undecided on the way it was resolved.  I am not at all qualified to speak about ableism so I’ll leave it at that.  Suffice to say, that language exists here.


“You must enter where you fear to tread”