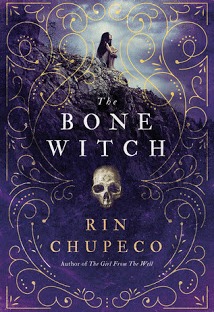 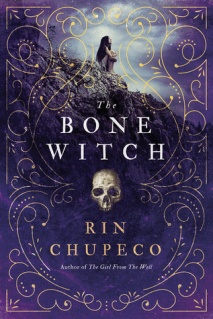 Blurb:
“In the captivating start to a new, darkly lyrical fantasy series for readers of Leigh Bardugo and Sabaa Tahir, Tea can raise the dead, but resurrection comes at a price…Let me be clear: I never intended to raise my brother from his grave, though he may claim otherwise. If there’s anything I’ve learned from him in the years since, it’s that the dead hide truths as well as the living.When Tea accidentally resurrects her brother from the dead, she learns she is different from the other witches in her family. Her gift for necromancy means that she’s a bone witch, a title that makes her feared and ostracized by her community. But Tea finds solace and guidance with an older, wiser bone witch, who takes Tea and her brother to another land for training.In her new home, Tea puts all her energy into becoming an asha-one who can wield elemental magic. But dark forces are approaching quickly, and in the face of danger, Tea will have to overcome her obstacles…and make a powerful choice.”

Review:
This is one of those books that I always wanted to read but never quite got around to it and after the hysteria went down after it’s release, it melted into the back burner.  I finally got around to it and while I enjoyed the vast majority of it, there are still pieces that are causing my footing to be less than sure.

“Then perhaps we should carve a world one day where the strength lies in who you are, rather than in what they expect you to be.”

1.  The characters.  For the most part, I really enjoyed the characters.  Tea, is obviously the main protagonist and we’re in her head for a vast majority of the book.  There is also a large supporting cast with the two maids she works with, her brother, Fox, Lady Mykaela, Mistress Parmina, Likh, and Prince Kance being the most prominent.  I do appreciate the slew of characters as, to me, it really fleshes out the world and more accurately portrays a whole life.  However, many of the characters were lacking that certain something that enables me to remember them past the first day.  I’m writing this review only a half an hour after finishing the book and already, some of the names of the supporting characters are falling away.  Conversely, the characters that are very rounded and well-done truly bring life to the story.  Tea especially is such an interesting character and her interactions with the other characters moved the story along well.

“Sometimes it is good to remind ourselves how bitterness tastes.”

2.  The plot.  Speaking of the story, this is the element that I am generally the most conflicted with.  On one hand, there’s this really great drive in the middle of the book that kept me reading.  The lulls in action are timed perfectly and there’s a very natural lift and fall.  The author chose to do a sort of frame story with this in that she started in the ‘future’ with the older Rin looking back on the younger one.  Between each chapter there was a bit of commentary from the older Rin as she told the story.  I’m still a little undecided about this mostly because of the ending.  Whenever an author uses this technique, it’s generally most effective if the younger and older versions meet at the end and the reader finally grasps the true implications of the choice (because of future actions that are happening/situations, etc) but for me, the connection missed.  Like their hands reached out but were off by a few inches so the baton clattered to the ground.  Still, the anticipation building up to the ending is fabulous.

“There is no greater strength than the ability to understand and accept your own flaws.”

3.  The concept and it’s execution.  This is the second most shaky spot for me.  I absolutely love the idea of this book and after about 200 pages, I got a good grasp on how it all worked.  At first, I wasn’t so thrilled with not understanding the whole magic thing (mostly how daeva (basically ‘monstrous’ beasts that resurrect and tromp about killing people) factored into everything) but later I came to the conclusion that I’m too accustomed to info dumps and by ‘living’ in the world, I got a better, working understanding of the whole situation and world.  However, going back to the ending, I felt like it was all lost on me.  As I said before, there was a missed handoff but I also felt a little left behind as to the significance of Tea’s plan.  I just didn’t put together how it actually would work and what it would solve.

“You think in the same way men drink, Tea,” my father once said, “far too much—under the delusion it is too little.”

4.  The romance (or lack thereof).  I just want to take a moment and appreciate the fact that I have barely anything to write for this section.  Like seriously, there is NO romance.  Of course there’s the mention of romance, but the characters that are involved in those relationships decide not to do anything about it because they have bigger things to be thinking about.  After reading so many books that preach the power of love and putting loved ones above all else, it was so refreshing to read about an MC and her associates that have bigger things to be worried about.  But again, the ending totally threw me through a loop (I’ll stop there because #spoilers).

“You can be the most powerful witch in the land, but you will always have a weakness, and that will always make you believe you have no power when someone exploits it. There is no greater strength than the ability to understand and accept your own flaws.”

5.  The writing.  Final section, I promise.  I couldn’t wrap up this review without summarizing what really bothered me about this whole book.  More than anything, I think the reason I was so slow on the uptake with the world and the actions within it is the writing.  Because the book spans a longer length of time and within that time there’s a lot of mundane actions, I think the author went a bit ham with the telling instead of investing more time in the scenes themselves.

“When people cut us, we are expected to do only two things: smile and bleed.”

The Final Verdict:
An abundance of telling over showing seeded confusion about the workings of the world and reached a culmination point at the end.  However, my love of the concept and the characters endears me to this series.
4 stars
Will I continue with the series?
Yes!  If for nothing else, to try and figure out what exactly is happening with that ending.

0 thoughts on “Review Wednesday: The Bone Witch by Rin Chupeco (#1)”