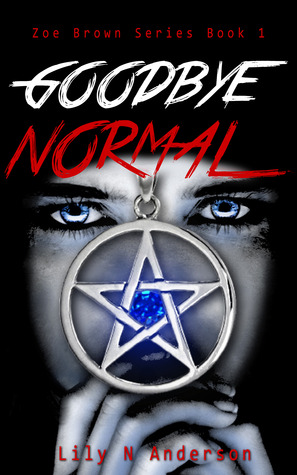 Amazon  Goodreads
Goodreads Blurb:
“Being a daughter, sister, friend and crush-sick with an ex-schoolmate, Zoe Brown is just another ordinary high school graduate. In defiance of coming from Doomsberg, a town that was once in history abandoned for witchcraft, Zoe has never believed in the craft.

But when a magical pentagram chain defines her fate, the Never theory is put to rest. In the midst of Doomsberg Association of witchery, she witnesses a prophesy that has failed for 186 years pick her responsible for safeguarding her town against black magic witches. This fight is waged against the wrath of a vicious untraceable black magic humeleon (human chameleon) and his master, a powerless but immortal witch. Her chances of attaining victory are only viable by forming an alliance with the association’s confined, ruthless and dangerous humeleons (the same ones that had caused massacre and abandonment upon her town)Terrifying revelations, secrets and tough decisions succumb her small world. With that, her normal life is bid farewell.”

Review:
Thank you so much to the author, Lily N. Anderson, for gifting me with a copy of this book in exchange for an honest review!
I’ve been going through all of the books I’ve ever read and I don’t think I’ve read one about witches.  At least, none that I recall – if you know one, let me know!  So because of that, I was going into this not knowing what to expect.  I really liked the plot overall.  Ms. Anderson did a very nice job introducing us to the world of witches.
Oh wait I HAVE read a witches series before!  How could I forget the Everwild series by Kayla Jo??  Hehe don’t mind me…
Anyway, when I was reading the first couple of pages, it seemed like Ms. Anderson didn’t really have her footing in the story and hadn’t quite decided what exactly was going to play out and how to introduce that.  However, after the first 30 or so pages, it got so much better and cleaner and smoother.  The same goes for the dialogue.  In the beginning, it was pretty stiff and only improved slightly throughout the book.  Adding a few contractions would do wonders.
I also would like more explanations about the Humeleons (for some reason that confused me but it’s probably just me).  Just in general, it seemed like events blurred together for me.
Other than all that jazz, I really liked the characters and the betrayal was an amazing part of the plot!  I absolutely loved the ending!  Not a cliffhanger, but not totally softened off either.
Final Verdict:
Goodbye Normal is a pretty compelling read with a nice plotline and well-developed characters.  Someitmes, I was unsure if the author was sure of herself and it showed in some stiff dialogue and a somewhat awkward beginning.  After the first few pages though, it all smoothed out into an amazing story with just the right plot points and twists to keep me interested.
3.5 stars