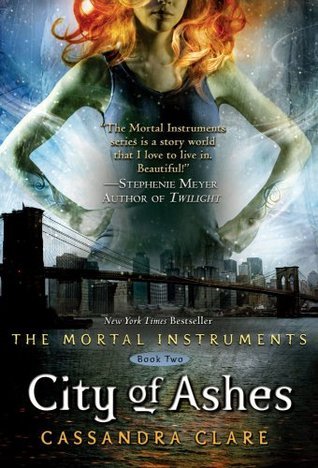 Amazon  Goodreads  Book Depository  Barnes and Noble
Goodreads Blurb:
“Clary Fray just wishes that her life would go back to normal. But what’s normal when you’re a demon-slaying Shadowhunter, your mother is in a magically induced coma, and you can suddenly see Downworlders like werewolves, vampires, and faeries? If Clary left the world of the Shadowhunters behind, it would mean more time with her best friend, Simon, who’s becoming more than a friend. But the Shadowhunting world isn’t ready to let her go — especially her handsome, infuriating, newfound brother, Jace. And Clary’s only chance to help her mother is to track down rogue Shadowhunter Valentine, who is probably insane, certainly evil — and also her father.

To complicate matters, someone in New York City is murdering Downworlder children. Is Valentine behind the killings — and if he is, what is he trying to do? When the second of the Mortal Instruments, the Soul-Sword, is stolen, the terrifying Inquisitor arrives to investigate and zooms right in on Jace. How can Clary stop Valentine if Jace is willing to betray everything he believes in to help their father?In this breathtaking sequel to City of Bones, Cassandra Clare lures her readers back into the dark grip of New York City’s Downworld, where love is never safe and power becomes the deadliest temptation.”

Review:
This was like the typical middle of a series book for me.   All full of filler and fluff and sort of boring in most places.  I did like it – don’t get me wrong, but it was missing something essential.  If you know what it is, let me know because I just can’t figure it out!
Let’s start at the beginning shall we?  It was very slow.  I had to force myself to read each chapter.  As you might expect, that isn’t a good thing.  After a bit, it picked up though which was good.  Except my troubles don’t stop there.
Can I just say how incredibly frustrating it is when someone is actually trying to say something important and they never get to say it because they’re being constantly cut off?  That’s like the story of this book and it got in credibly annoying.
Speaking of annoying, let’s chat about Jace and Clary for a second.  I really wish they (meaning everyone who’s experienced) would get Clary some training.  They’re all trying to shelter her and ease her into the life but when she keeps getting attacked and getting pulled into things, well you’ll have to get her ready eventually.  She’s just so helpless!  And Jace.  Oh goodness what happened to you?  You were perfect in City of Bones!  But in City of Ashes, you were so annoying and whiny and controlling and moody and just UGH.  You didn’t have many funny one-liners either 😦
WHEW.  Okay now with all that ranting out of my system, let’s actually discover some good things about this book shall we?  I loved the extra spin the Inquisitor put on things with all her personal grievances and complications.  I realize she created some major problems which was bad but she really added interest to the plot and demonstrated that The Clave isn’t infallible and that they are human and make horrible horrible mistakes and cost lives.  Yeah they’re not looking so hot in my eyes right now.
The feels in this book were just amazing.  I felt like I was right there with the characters and when the final battle happened (not the final final battle but just the final battle) it just blew me away.  I just love the ending!  I also loved the mystery in this one.  A lot of people are keeping dangerous secrets which keeps things interesting.  Oh and Magnus is now replacing Jace in my heart!
Final Verdict:
A very exciting read once it picked up after the never ending, boring introduction.  The characters seemed to be more annoying *points at Clary and Jace* but they did add some interesting road bumps to the plotline.  So overall, not a total loss but still a filler book through and through.
3.5 stars
Quotes:
“I don’t want to be a man,” said Jace. “I want to be an angst-ridden teenager who can’t confront his own inner demons and takes it out verbally on other people instead.”“Well,” said Luke, “you’re doing a fantastic job.”
“We came to see Jace. Is he alright?”“I don’t know,” Magnus said. “Does he normally just lie on the floor like that without moving?”
“Well, I’m not kissing the mundane,” said Jace. “I’d rather stay down here and rot.”“Forever?” said Simon. “Forever’s an awfully long time.”Jace raised his eyebrows. “I knew it,” he said. “You want to kiss me, don’t you?”
“That does it,” said Jace. “I’m going to get you a dictionary for Christmas this year.”“Why?” Isabelle said.“So you can look up ‘fun.’ I’m not sure you know what it means.”
“I’ve got a stele we can use. Who wants to do me?”“A regrettable choice of words,” muttered Magnus.”
“Mom. I have something to tell you. I’m undead. Now, I know you may have some preconceived notions about the undead. I know you may not be comfortable with the idea of me being undead. But I’m here to tell you that undead are just like you and me … well, okay. Possibly more like me than you.”
“Is standing by the window muttering about blood something he does all the time?” asked Simon.“No,” Jace said. “Sometimes he sits on the couch and does it.”
“As long as there was coffee in the world, how bad could things be?”
“Hey Baby.Baby? You’re kidding me, right?I was trying it out. No?No.”
“If you really love something, you never try to keep it the way it is forever. You have to let it be free to change.”