Skip to content
September 6, 2014 Laura
So because this is my R&R September, I cut myself off from the library.  Which means no new books this week (I also am not accepting any more R&R requests at the moment)!  So here’s an R&R review of Dragonfly.  I will still have a summary of this weeks posts at the end! 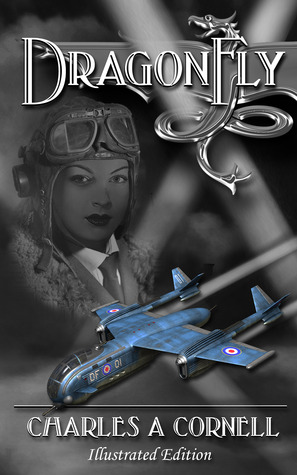 Dragonfly by Charles A. Cornell
Amazon  Goodreads
Blurb:
“A young woman with the fate of a nation in her hands.

An aircraft designed by science, fueled by magic and flown with passion. A World War re-imagined like never before. Strap yourself in for a wild ride as award-winning author Charles A. Cornell takes you on his dieselpunk adventure, DragonFly; a collision of science fiction with fantasy that fast forwards steampunk into an alternative World War Two. In 1942, an unlikely heroine changes the course of history. On the eve of invasion by the Nazis, twenty-two year old RAF pilot Veronica ‘Ronnie’ Somerset is fighting another battle – winning respect within the stuffy, male-dominated British military. She’s feisty and brash and determined to overcome every obstacle to become Britain’s first female combat pilot. When Ronnie is re-assigned to Enysfarne, a mysterious Royal Navy base off the coast of Cornwall, fate places her inside the cockpit of the most revolutionary aircraft ever invented. Brilliant engineer, Dr. Nigel Pennbridge has discovered quadra-hydrogen, an element that powers the DragonFly, a remarkable fighter-bomber that carries the hopes of Britain on its blue and silver wings. Across the English Channel, Nazi Germany is busy planning its next conquest. Reichsführer Bernhardt Morax, Hitler’s personal sorcerer and leader of the Third Reich’s Zauber Korps is preparing his Blutskriegers for the invasion; bio-mechanical warriors created by a depraved occult science whose dark secrets cross the boundaries of evil. In DragonFly, Veronica Somerset’s adventures unfold in two self-contained novellas: In Part I: ‘To Hell and Back’, Ronnie proves she’s a hard-nosed, quick-thinking daredevil. She embarks on a dangerous mission behind enemy lines to spy on Hitler’s invasion plans and rescue a defecting officer from the Zauber Korps. Hans Schüller is a Nachtjäger or Night Hunter who introduces her to psychic powers she didn’t know she possessed; powers that entwine her destiny with his. In Part II: ‘Victory or Death’, DragonFly comes to its dramatic conclusion. The Nazi invasion fleet is gathering off the shores of England. Morax, with help from his spies, is determined to seize the DragonFly and unlock the secrets of Enysfarne’s Druid past. Will the Druid wizard, Affodill – whose ancestral home of Enysfarne has been expropriated by the Royal Navy – join forces with the British, or will he make a pact with the evil Morax? Can Princess Victoria and Ronnie Somerset convince Affodill to place his magic in the service of a nation that has betrayed his Druid ancestors for centuries? ‘DragonFly – the Illustrated Edition’ is the ultimate DragonFly reading experience! It’s packed with sixty illustrations that make the action jump off the page, including character dossiers, historical ‘retrographs’ and fantastic designs of retro-futuristic aircraft. Eleven of the sixty illustrations are exclusive to this omnibus edition of DragonFly and will be unavailable anywhere else!”

Review:
I received this for review through the Goodreads group ebook miner!

After pondering it for a while, I found there were two main problems I had with this book that made it less enjoyable.

First, there was a lack of clarity throughout the book.  Some things weren’t thoroughly explained (like the whole sorcerer bit and Veronica’s past) and it just wasn’t clear.  Sometimes the plot and what was happening to the characters was a bit fuzzy as well.  It sometimes felt like the author had taken a two month break between writing chapters and didn’t remember what had happened from one to the next.

Secondly, there was a lack of emotion that’s needed for me to connect with the characters.  There were few, if no emotions thoroughly expressed throughout the book which led the characters to be 2D and unreal.

However there were things I enjoyed.  I loved the whole idea of the book.  How the author mixed fantasy and history without ever really changing history itself.  The plot was also very exciting and engaging.

The Final Verdict:
Overall, this book was just okay.  It was engaging but not a page-turner.  There was a distinct lack of clarity and emotion that had be detached and sometimes confused.  The idea of the book was fabulous though!
3 stars


Quotes:
“The challenge of a journalist is to condense a thousand thoughts into a single sound bite. The challenge of an author is to place a simple idea on a canvas as infinite as your imagination. No doubt about it. I have the easier job.”


“The castle of Enysfarne was a dark and towering force that hovered over what was left of my innocence. It contained my destiny, of that I had no doubt whatsoever; a fate that threatened to wipe the blush off my face and turn me into the man my father always wanted me to be… Veronica Somerset, Dragonfly.”


“And what about our hopes Busbee?  When did dreams become such a luxury?”
“I guess when nightmares became so cheap”


“Come in, Berlin.  Do you read?  This is Flight Lieutenant Veronica Somerset, Royal Bloody Air Force, flying up your arsehole in DragonFly One.  Okay, Herr Hitler, send up your worst… if you dare.  Because this girl’s not going to back down from a fight!”


“The fuel for imagination comes from the feeling in your heart.”


A Week in Review: