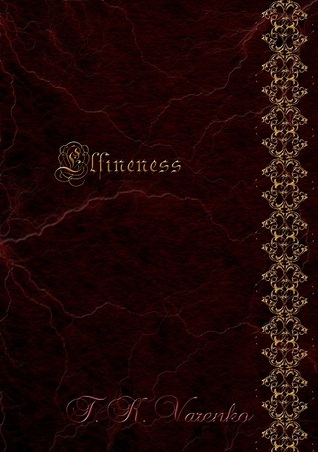 Amazon  Goodreads
Goodreads Blurb:
“Back to her own self and kingdom,

Luella’s winning back her name Securing her reign and freedom With Derek, her re-found flame. When things are looking up like never And happiness is at her door, The Elders want her, however, Engaged in the impending war. Can she refuse without facing The consequences it may bring? Will she be capable of tracing The missing links she needs to win? And this is all on the background Of nanobots beyond control Destroying down to the ground The human race condemned to fall.”

Review:
Thank you to the author, Tatyana K. Varenko, for gifting me with a copy of Elfineness in exchange for an honest review!
This is the first book I’ve ever read that’s written in verse.  I have to say I’ve developed a healthy respect for all authors that choose to write in verse.  It is truly an accomplishment to be able to tell a story with such a limited choice of words.  All the lines have to flow together.
Sometimes I got a bit confused about the plot because I believe there was once a flashback within a flashback.  However, once you get about halfway through, everything starts to make sense (at least to me).  I really liked the fantasy feel of this book.  I’ve always loved any book that involves fantasy and oldish speak.  There were some instances where the author chose to use modern language in the mix with the old stuff which didn’t work.  Sometimes it did, sometimes it didn’t.
The part where Derek dies or is trapped in the dagger or whatever happens to him was sort of glossed over and wasn’t made a big deal.  The aftermath, yes, but in that moment when he disappeared, nothing.
I loved how Luella’s character developed and grew so much throughout this book.  You learn so much about her and her values and way of thinking which I really connected with.
Final Verdict:
This book is quite an accomplishment to be able to write the whole thing in verse.  Sometimes, the plot got a bit confusing and I would have liked a bit more explanation about the world in general.  The fantasy feel was fantastic and Luella’s character grew so much – amazing!
3.5 stars
Quotes:
“Banal or not, looks are deceiving,And all that glitters is not gold –And yet, we cannot help believingWhat meets the eye – it’s uncontrolled.”
“Don’t be afraid of caterpillars –They are reborn as butterflies.Transformed by love are saints and killers.The truth is sometimes worse than lies.”
“Life’s just a sacrifice, a ransomWe pay to Death for Love to save,Which turns to be as great as handsomeTo get a blessing from the grave.”