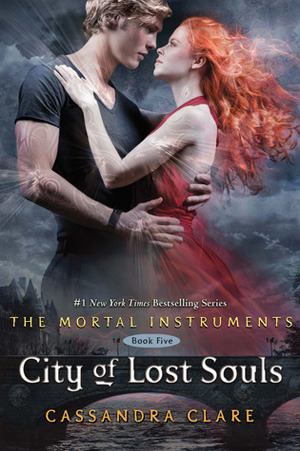 What price is too high to pay, even for love? When Jace and Clary meet again, Clary is horrified to discover that the demon Lilith’s magic has bound her beloved Jace together with her evil brother Sebastian, and that Jace has become a servant of evil. The Clave is out to destroy Sebastian, but there is no way to harm one boy without destroying the other. As Alec, Magnus, Simon, and Isabelle wheedle and bargain with Seelies, demons, and the merciless Iron Sisters to try to save Jace, Clary plays a dangerous game of her own. The price of losing is not just her own life, but Jace’s soul. She’s willing to do anything for Jace, but can she still trust him? Or is he truly lost?Love. Blood. Betrayal. Revenge. Darkness threatens to claim the Shadowhunters in the harrowing fifth book of the Mortal Instruments series.”

Review:
This series is one of the MOST painful series’ I’ve ever read.  Literally.  Every five pages I’m facepalming or have to set down the book and just sit in shock.  I really thought that with all the hype it would be better.  Sadly, not for me.
There were a total of three things that saved this book from a 1 star review.
1.  Magnus.  Oh yes.  He has maturity and intelligence and awesomeness!  He’s just all around goodness.  He also really kept things moving with his knowledge and insight.
2.  The battle’s and Clary’s power.  I won’t say anymore so I don’t ruin it but as to be expected, there’s a battle near the end and it’s pretty well written!
3.  The complexity of Sebastian’s character.  Really, he’s one of my favorite villain’s just because he can be so many things and play so many parts.
Now, everything else was a mess.  Clary.  Do I even have to say it.  YOU ARE NOT THE CENTER OF THE UNIVERSE.  She is beyond idiotic.  You know those characters who act before they think?  She isn’t one of them.  She doesn’t even reach the thinking part.  It’s just ‘Jace missing.  Me find.  Me found Jace.  He cute.’  That’s it.  So I was more than a little annoyed when she betrayed him.  Yeah, you read that right.  And then near the last pages of the book she suddenly has a ‘life lesson revelation’ about how you treat other people and their choices!  And quite honestly, she screws everything up and doesn’t really care so long as she has Jace back.  At least she isn’t helpless anymore.
All the other characters haven’t changed much throughout the series and have stayed pretty static.  And Alec.  Oh Alec.  Why would you even consider it?  I’m sorry for all the spoilers that aren’t really spoilers but I couldn’t help it.
The Final Verdict:
Clary was by far the most annoying character and the rest except Magnus stayed pretty static and unchanging.  Magnus, the battle’s, Clary’s power, and Sebastian were the only lights in the darkness.  I’ll keep plodding on – I’m already this far, I may as well finish all of the series’.
3 stars
Quotes:
“I don’t care,” Clary said. “He’d do it for me. Tell me he wouldn’t. If I were missing-” “He’d burn the whole world down till he could dig you out of the ashes. I know,” Alec said.”
“She turned and looked at him. “Ducks?” she said again.A smile tugged the edge of his mouth. “I hate ducks. Don’t know why. I just always have.”
“Basia coquum,” Simon said. “Or whatever their motto is.”“It’s ‘Descensus Averno facilis est.’ ‘The descent into hell is easy,” said Alec. “You just said “Kiss the cook.”“Dammit,” said Simon. “I knew Jace was screwing with me.”
“As far as I’m concerned, this is the worst thing that’s happened since I found out why Magnus was banned from Peru.”
“Missing, one stunningly attractive teenage boy. Answers to ‘Jace’ or ‘Hot Stuff”
“I stabbed you. With a massive sword. You caught on fire.”His lips twitched, almost imperceptibly. “Okay, so maybe our problems aren’t like other couples.”
“What have you done to my cat?” Magnus demanded… “You drank his blood, didn’t you? You said you weren’t hungry!”Simon was indignant. “I did not drink his blood. He’s fine!” He poked the Chairman in the stomach. The cat yawned. “Second, you asked me if I was hungry when you were ordering pizza, so I said no, because I can’t eat pizza. I was being polite.”“That doesn’t get you the right to eat my cat.”“Your cat is fine!” Simon reached to pick up the tabby, who jumped indignantly to his feet and stalked off the table. “See?”“Whatever.”
“Does she still love you?”“I don’t think so,” Magnus said dryly. “She wasn’t very pleasant the last time I saw her. Of course, that could be because I’ve got an eighteen year-old boyfriend with a stamina rune and she doesn’t.”Alec sputtered. “As the person being objectified, I … object to that description of me.”
“I never cared,” he said. “I wanted you anyway. I always wanted you.”