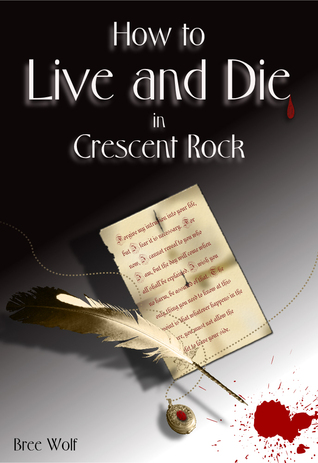 Amazon  Goodreads
Goodreads Blurb:
“In the small town of Crescent Rock, located in the most southern dip of North Carolina, high school senior and head of the cheerleading squad QUINN MCPHERSON leads a life…almost like the majority of her peers all over the country. Ruling her school with a firm hand, always followed by an entourage of personality-lacking wanna-bes dying to be just like her, Quinn takes the control she’s always had over her life and those in it as a given. Her word is obeyed, followed to the point and never challenged.

Until one night sends her perfectly structured life into a tailspin – literally.

As her car threatens to spin off the road, Quinn is saved in the last moment by a handsome new-comer who–as she soon discovers–is more than human, and his presence in town is not a coincidence. Although he’s never met her, ARNAUD DE LA ROCHE came to save her life. From that moment on, as one near-death situation pours into another, Quinn is constantly torn between feeling grateful for the safety of his presence and the almost desperate urge to claw his eyes out. Finding in Arnaud an equally strong mind, not used to backing down or taking orders, Quinn soon finds herself infuriated whenever she lays eyes on him. Not even when more and more supernaturals come pouring into Crescent Rock and dark secrets are dragged into the light of day are they able to set aside their differences.

“
Review:
Thank you to the author, Bree Wolf, for gifting me with a copy of How to Live and Die in Crescent Rock in exchange for an honest review!
There is only one thing that bothered me a bunch while I was reading this.  I just couldn’t get over the Twilight parallels.  Naive girl finds out about the supernatural world via the hot vampire.  She also sees werewolves (of whom happens to be the vampire’s friend).  They fall in love while people try to kill both him and her.  Sound familiar?  Yeah, that’s what I thought.

Other than that little glitch, it was pretty smooth sailing.  The MC Quinn is definitely not your average protagonist.  It was almost humorous to see how she “ruled” her school as well as her interactions with her friends and not-so-friendly-friends.

That plot twist at the end… I was NOT expecting that.  I knew something was up with Jo but that?  Yeah that came out of nowhere!

As far as the plot, it was pretty good.  I mean, the action scenes were placed just so in the optimum spots and I was always looking for what was going to happen next.

The one thing I truly applaud the author for is the mystery of Jo.  As I mentioned in one of the preceding paragraphs, it was a very well done mystery.  I truly can’t wait to read the next book because of that last sentence!

The Final Verdict:
This is a very good book although the similarities to Twilight got to me.  The mystery of Jo and the continuing action scenes kept me interested.
3.5 stars
Quotes:
Okay, I know for a fact that I highlighted things while I read it on my kindle.  There must have been a glitch and it deleted them or something because this no quotes thing is getting a bit ridiculous!  I’ll go back through and highlight them again I suppose.