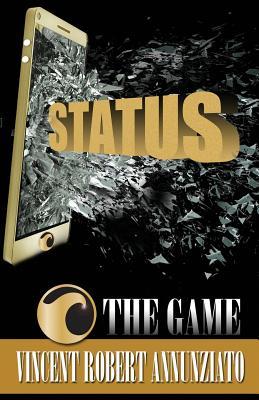 If you enjoy suspense, thrilling action and high stakes drama, then you will enjoy reading “Status The Game!” Author Vincent Robert Annunziato seamlessly guides readers through a landscape where virtual reality trumps real life and popularity is the only thing worth living for.

“A must read for every high schooler in America.”

If you enjoy suspense, thrilling action and high stakes drama, then you will enjoy reading “Status The Game!” Author Vincent Robert Annunziato seamlessly guides readers through a landscape where virtual reality trumps real life and popularity is the only thing worth living for.

Bob Brooks is down on his luck. He ekes out a living as a substitute teacher and grabs odd jobs to make ends meet. It’s never enough though and desperation sets in. Partly his fault, Bob is an overgrown kid at heart, dreaming of the day he can dedicate his life to full time gaming. It’s selfish, but games are a calling…. And teaching? Just a bridge to something else. Life goes from bad to worse until Bob reads about a new internet game called Status. The internet sensation promises money, prizes and popularity to players who succeed. Bob marvels at the prospects and perfects a plan. Teach students about the internet while playing Status and have students build up his points in the game. With a never-ending supply of incoming, naïve teenagers, it’s perfect. Madison High is perfect too. Affluent, hi tech and filled with students who have money and time. Even better? The Principal thinks he’s cute and loves his proposal on Status. Once Bob debuts at Madison, though, he finds out that great plans aren’t always so great. Especially once he learns his students are already playing Status and they are better at it than him.

Everyone is suspect in this thrilling adventure of social battles that pits brains versus brawn and haves versus have nots. Find out who wins! Oh and by the way, obtaining enough status might just make you the next big star of the internet. With fame and fortune just a rumor away, who wouldn’t want to play… “Status?”

“
Review:
Thank you to the author, Vincent Robert Annunziato, for gifting me a copy of Status The Game in exchange for an honest review!
Overall, I really enjoyed this book.  I’ve never really read a book about video games before (except Who R U Really?) so it was intriguing to get inside the head of a gamer and find out what exactly they think.  I’m not sure Bob was the right person for the job.  Well, maybe he was, but the entirety of my discontent centers around him and his attitude.  So let’s break down Bob shall we?
Bob is your average gamer who thinks he has what it takes to get into the big leagues.  Unfortunately, he’s a little misguided which was made painfully real in this book.  It was actually one of my favorite parts of the book, when Bob goes into the school and realizes how much more advanced kids half his age are at the game.  I think more could have been done with the education aspect.  We never really get to see Bob actually teach even though that’s his job description.
Bob is also seemingly attracted to every female he encounters.  That was also quite humorous to me.  I think that being the case, something more could have been done with his ‘final’ romance to make it evident that she is different.
Now the good aspects!  I loved how intricate the loyalties were.  It almost reminded me of an Agatha Christie book – how you never really knew everyone until the final chapters.  In general, I love reading those kinds of books and this one is no exception!  Going along with that, the last plot point really brought home the idea that the game infiltrated these kids’ lives and that it’s more than a game.  Those last few sentences just completely blew my mind.
I also really liked the interview portion.  Every chapter, it’d open with rules from Status and part of an interview with Bob after the fact.  Initially, the interview could have been introduced better but once I understood the structure, it was fascinating to see how differently Bob’s thinking was after the entire Status mess.  That really made the book for me, along with the loyalties.
The Final Verdict:
Bob was quite the questionable character but the plot really made up for where he was lacking.  The intricacies of the game and how people played was fascinating to me.  Also, the interview portions of the chapter and the final scenes were brilliantly done!
4 stars
Quotes:
Again, my kindle must have wiped all my quotes… I’ll have them up in a few days!