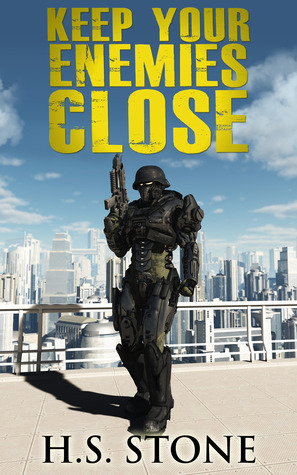 With the alien invaders’ arrival, Lia and her best friend, Bryn, sign up for military duty to protect their town. When the aliens attack, however, Lia and her comrades are helpless to stop them. Worse, after the attack, she discovers that several of the townspeople, including her family, were abducted. Despite Lia’s pleading, no one wants to save those taken by the aliens.Desperate to rescue her parents and her little sister, Lia turns to the only source of help she can find… a captured alien invader.”

Thank you to the author, H.S. Stone, for gifting me with a copy of Keep Your Enemies Close  in exchange for an honest review!
I really, really liked this concept.  I mean, it’s not every day you read a book where the humans are the bad guys.  Or where humans are the invaders.  It was really interesting to read what had become of our society and what they did to survive.  This book was definitely unique in more ways than one although that’s the big one.
When I started reading at the beginning, I almost thought they were humans.  I hadn’t reread the blurb before I started it and I just thought it was the 1980s or something.  I’m not sure how I feel about that.  On one hand, isn’t that kind of lack of originality?  However, that also shows how alike we are to other species in the universe (theoretically of course).
I really liked the dual POV between Lia and Jonathan.  That really helps you see both sides of the story and really how much brainwashing and conformity through Standard Protocol the humans went through during their time on the spaceship searching for a new planet.  I’ve been learning about sociology as of late and how people accept conformity and what the circumstances have to be so I found Standard Protocol particularly interesting.  The thing is, it’s so plausible that we would invoke the military’s ‘no questions’ policy while searching for a new planet because it is such an important matter.
Another thing I found extremely interesting was Jonathan’s past.  I loved hearing about how he grew up on the different spaceships and how they organized everything.  Lia’s past was also extremely interesting.  I mean, they are from a different planet and all.
The title is entirely appropriate considering the plot.  That was basically the first half of the book – Keeping Your Enemies Close.  Neither Lia and Bryn or Jonathan wanted to let each other out of their sight (oh and side note real quick – Lia and Bryn’s romance was both totally predictable (so much so that I can share it with you and feel confident that I haven’t spoiled) and so adorable).  The last half of the book was really awesome too, especially when the plan it revealed.
The ending was so heart-wrenching!  I simply couldn’t believe it!
One other thing – I’m extremely glad Lia and Jonathan don’t ever have a romance.  I’ve about had my fill of ‘forbidden’ romances!
The Final Verdict:
A very interesting book with an old concept turned on it’s head.  I loved reading about both Jonathan and Lia’s pasts and was quite happy when they didn’t immediately have a ‘connection’.  I also loved learning about the different lifestyles and Standard Protocol.  I am a bit shifty on how similar both races seemed although not having little green people for aliens is definitely a good thing in my book.
4.5 stars
Meet the Author
Even before he could read, H.S. Stone wanted to write a book. Fascinated by the stories that seemed to leap from his kindergarten teacher’s books, he went home and wrote his own book, with illustrations and bound by staples. Of course, since he didn’t know how to read or write yet, the book was full of gibberish.

Undaunted, H.S. eventually mastered the ABC’s and continued to write throughout his grade school years, adolescence, and into adulthood. Despite earning a degree and working in a field not related to writing, he continued to pursue his writing passion.

H.S. Stone’s publications include novels aimed at Young Adult and Middle Grade readers as well as several short stories. He currently lives with his family in the San Francisco Bay Area.
https://www.goodreads.com/hsstone
http://hswriting.blogspot.com/

1. Where did you get the inspiration for Keep Your Enemies Close?
I’ve been a fan of alien invasion stories since I was a kid, but I’ve never read one where (*minor spoiler alert*) we, the human race, are the alien invaders. So, of course, I felt compelled to write that story.

2. What is your favorite part about writing in the sci-fi genre?
The world-building. Since the stories often take place in the distant future or on other worlds, sci-fi authors have more freedom to build the world the way they want to. Although the alien world in Keep Your Enemies Close is based on Earth in the late twentieth centuries, there are some definite differences.

3. Do you have a favorite place to write? Do you like to listen to music that matches the scene while you’re writing?
Unfortunately, the answer to both of those questions is “no.” I wish I had a writing office where I could hole up for the day. However, I have a non-writing day job, so I squeeze in my writing whenever and wherever I can. I’ve written on the living room couch, in bed, during my kids’ practices, in airports, you name it.

5. Lia is the main character in the story. Did you base her personality off of a person or people in your own like?
No, I can’t say that I based Lia off of anyone I know. There are a few things that she does which are reminiscent of people I know, but I tried to largely create her character from scratch.

6. Did you have the entire book (as well as the ending) planned out beforehand?
Yes. My process before writing Keep Your Enemies Close (and the last two novels I wrote) was to first write a one-page summary of the story. Then I made an outline at the chapter level, with a few sentences describing the scenes in each chapter. From that, I wrote my first draft.

7. Any advice for aspiring writers?
I would say two things to anyone who wants to be a writer: (1) read, and (2) write because you love to write, because there are stories in your head that will make you explode if you don’t put them down on paper, not because you hope to get rich and famous.

Mr. Stone has so kindly offered to giveaway an ebook of Keep Your Enemies Close through Smashwords!  There will be one winner and it is open internationally so long as you can accept Smashwords books!