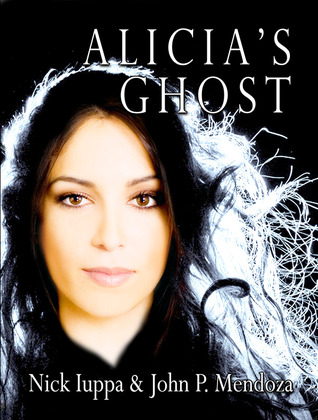 AND THE WORLD’S MOST HAUNTING HEROINE! The astoundingly beautiful Alicia has ended her modeling career in Mexico City, married the love of her life, helped pay his way through college, settled into a comfortable life in Los Altos, California, and now she’s dead… MURDERED. Her husband, Professor Carlos Mann, has wrapped himself in an obsessive-compulsive disorder to hide from that fact. But when Amy Joy, one of Carlos’s students, is sold into slavery by a Chinese mob that traffics in Asian girls, Alicia returns with a vengeance. Can Alicia save her man, foil the human traffickers, and destroy her murderer? Overwhelming supernatural forces stand against her. But, hell, that just makes her stronger! Told in the voices of Carlos and Alicia Mann, Alicia’s Ghost is a funny, imaginative and thrilling ride through the human and spirit worlds of Mexico and the American Southwest.”

Thank you to one of the authors, Nick Iuppa, for gifting me with a copy of Alicia’s Ghost in exchange for an honest review!

You know, I don’t think I’ve read a book about ghosts in a long long time!  So this was definitely something different for me.  It’s a different book in a lot of ways actually.  For example, one of the characters is ‘the popcorn man’ who is a drug lord/weapons dealer who has connections all over the world.  You’d think that in his business, there’d be more than a little unsavory things going on but Senor Popcorn is portrayed in a very positive light.  That was a very welcome change (although I have no idea how realistic it is considering I don’t have any contacts with that particular occupation) what with all the sad books I’ve been reading recently.

Now onto the ghosts.  I think it was a very good addition to the story although it could have been… I don’t want to say elaborated on… but more in depth I suppose.  And the fact that Carlos wasn’t at all surprised when he found out his wife was haunting him.  And really, there were only a couple people in the story who weren’t totally shocked by everything.  But no matter.  I loved the different personalities of all of the ghosts and the whole counseling idea (and the ‘giving back’ part).  That really added something different.

The plot was intriguing enough.  It wasn’t overly so that I couldn’t stop reading although I did really want to finish the story and see who would come out alive.  Especially with the raid on Mr. Popcorn’s compound.  That was a very nice plot point although it could have been dramatized a bit more.

I think I’ve been heading in one general direction with this review… it was good… but a little more.

I did really like the ending.  I was so heartbroken and then it ends on a perfect note of uncertainty!  I mean, THAT LAST SENTENCE!!!

The Final Verdict:
A very different and intriguing book although there just could have been more.  The ending was so good and the cast of characters was so diverse and realistic!  I also loved the twist on the ghost’s punishment and redemption.
3.5 stars


Quotes:
“Punishing the devil is a dangerous business.”


“Love lives on after death… but so do jealousy and hate.”


“I love you,” she moans as her image begins to fade. “I will always love you. Love me forever.”


“There’s something there, so deep, so beautiful that I’m amazed, and I laugh more out of wonder than anything else.”


Oh and Happy Super Bowl Sunday!  I’ll be watching the game (especially the commercials and the half-time show by Katy Perry!).