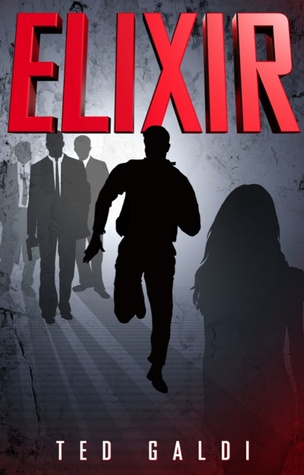 Amazon  Goodreads  Book Depository  Barnes and Noble
Goodreads Blurb:
“Meet 14-year-old Sean Malone. He has an IQ above 200, a full-ride scholarship to one of the country’s top universities, and more than one million dollars from his winning streak on Jeopardy. However, Sean wishes he could just be normal.

But his life is anything but normal. The US government manipulates him, using him as a codebreaker in pursuit of a drug lord and killing innocent people along the way.

For reasons related to his personal security, Sean finds himself in Rome, building a new life under a new name, abandoning academics, and hiding his genius from everyone. When he’s 18 he falls in love. The thrills begin again when he learns that his girlfriend is critically ill and it’s up to him to use his intellect to find a cure, a battle pitting him against a multi-billion-dollar pharmaceutical company and the demons of his past.

Elixir is a story about identity, secrets, and above all, love.”

Review:
Thank you to the author, Ted Galdi, for gifting me with a copy of Elixir in exchange for an honest review!

You know, I’ve always been fascinated by intelligence.  What causes it and the people who seem to have higher than normal intelligence.  It’s always been very interesting to me so it’s no surprise that I loved this book.  Granted, there were a few rough spots but it’s all water under the bridge.

When I started reading this book, it gripped me and didn’t let me go until the last sentence.  I risked missing the Super Bowl people!  Now that is some major gripping!  While the final ‘problem’ did go on for quite some time, it wasn’t really drawn out per say.  There was just a lot contained within it.  I think that’s the best thing about this book – there wasn’t anything that was necessary so everything just flew by.

Now about the Ebola.  I won’t tell you how it’s related to the story other than Sean has to find a cure or his girlfriend dies.  With the Ebola crisis hitting Africa now, this seemed all too real and is happening on a daily basis.   That’s what made the ending so fabulous for me.

The one rough patch would be Sean and Natasha’s relationship.  It all just kind of jumped from first date to serious relationship.  There was a little in between but it didn’t seem real exactly until she becomes ill.  I know there’s a page restriction and all to keep it interesting but it could have been developed a bit more I suppose.

The Final Verdict:
An action packed book with thrilling twists and turns that never bored me for a second.  The ending was very well done and I loved Sean’s ‘superintelligence’.  Sean and Natasha’s relationship could have used a little more oomph although the relationship between Sean and his aunt was amazing!
5 stars


Quotes:
“She almost doesn’t seem real to him, more like a collection of thoughts plucked from his brain and played back to him on a screen.  But he can smell her perfume and notice how she narrows her eyelids a bit when the wind blows and the way the shoelaces of her leopard-print sneakers flop as she steps.  She is real.  And he’s glad he’s real to her.”
“He can feel her heartbeat, just as fast as his”
“For Sean the idea of avoiding Paul Pine’s allegations is comforting, but he sees a new identity as something with much larger potential, a shedding of the labels he’s has his whole life, an escape from the story of his dark past.  A thrill courses through his chest.  He picks up the envelope and tears it open.”
“‘Why’d you try to solve it then?’
‘I wanted to see if I wouldn’t be able to.’
‘What do you mean?’
‘Everyone at school said it was the hardest one out there.  I thought maybe I’d… hit a wall trying to figure it out.’
‘You don’t hear that a lot at the NSA.’ Patrick chuckles, so does the professor.  ‘Why would you hope for… failure?’
‘It would be a change I guess.'”
“He bangs his hands together a few times, knocking the Doritos dust off.  ‘How much encoded info is in that…group?’
‘Pretty much all of it.’
Sean leans back, the gravity of the situation sinking in.  He’s quiet for about a minute, the crying baby the only noise between them.  ‘Sorry.'”
“The Smartest Person on Earth.  He hates that title, been called it three times before.”