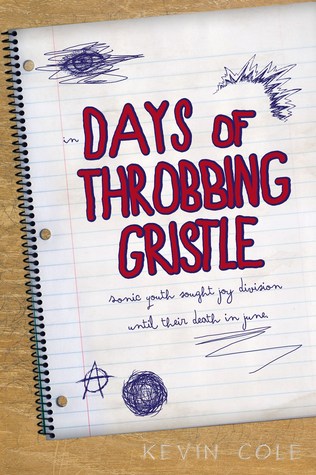 It’s 1987. Sam Henry Hay, a 17-year-old exchange student from Sheffield, hops into Texas, USA, with one burning ambition: Manipulate his gullible host parents into funding his university, and leave his dead-end life in Yorkshire behind.But is Sam manipulating America or America manipulating Sam? The clever lad schmoozes his way into many a bed and purse, yet can’t get rid of anyone. He executes careful plans, only to watch them disastrously fall apart. Worst of all, this once proud nihilist watches in horror as he reveals a conscience, in a world growing ever darker around him.Days of Throbbing Gristle is not your typical teenage tale. It’s a razor-slashing journey through a time and place that really was as bad as you’ve heard. For some, high school is the best time in their lives. For others, it’s a miracle they make it to the other side.”

Review:
Thank you so much to the author, Kevin Cole, for gifting me with a copy of this book in exchange for an honest review!
Hmm.  This book took me a long time to read.  Almost as long as it took me to read The Book Thief although for a different reason.  Or maybe I should be comparing it’s length to Eragon or Lord of the Rings.  Those are equally long books that took me forever to read but the ride was completely worth it in the end.  Let me just say right now that picking up this book is an investment but if you’re willing to make it, I think you’ll learn something about yourself, the world, and just what people think behind their eyes.
The book is set in 1987.  Now, I’m not all that familiar with that time period in American (and really world) history so I’m going to take a leap of faith and call it legit.  From the little that I do know, it seemed to be a pretty accurate representation although I do question all of the drugs and crazy tape making that was going on.  It definitely made for an interesting book however I’m not sure how realistic it is.  If anyone is familiar with Texas culture in the 1980s, help me out!
So.  I’ve already mentioned the length but I haven’t talked about how it got that long.  The book is in a sort of journalism form that documents Sam’s first year in America.  And he documents everything.  That’s what made it so tedious to get through.  Overall, there was just a lot of content, a  little more so than I think was necessary.  It was a good read, just very very long-winded.
Now the characters were really something.  I don’t think I’ve ever read a book with a set of characters like this one (in a good way, don’t worry).  In a way, you could tell they all came from the same mind (they had a certain… element to them) but the author added a little something different to each of them.  He made the main character Sam particularly interesting and with several glaring flaws in his morality.  It was quite refreshing.
The beginning was the hardest to get through.  it was a bit confusing because I didn’t quite understand the journal element (genius I know) so it made it a bit confusing and he was so elusive about why he was there that at first I thought he was a spy or something (again, this is me forgetting to read the blurb again before I started reading it).  So that’s on me.  And the ending.  WHAT WAS THAT?!  I can’t believe the author put me through that!  It was like the roller coaster going down that big hill and you think you’ve finally made it peacefully to the end when all of a sudden you drop 100 feet in an instant.  In my English class, we’re analyzing Virginia Woolf’s essay’s.  This ending reminded me of her way of violently ending an essay before pleasantly stating what all went wrong in a total nonchalant voice.  I loved it.
The Final Verdict:
This book is definitely an investment but if you have the time, I think it really is worth it just read something different.  There was a bit too much content for my taste however.  The cast of characters was very different and interesting and the ending was spot on torture 🙂  I should warn you however, there is some explicit content if you don’t like that sort of thing (17+ I should think).
4 stars

Kevin Cole was born in New York, raised in Texas, and now lives in Belgrade with his Serbian wife and their fat black cat.Mr. Cole enjoys historical fiction, such as Gore Vidal, and fake historical fiction, like George R. R. Martin. He writes fake historical fiction set in the recent past.Aside from making things up, Mr. Cole is fascinated by languages and economics, which have a lot in common with literature. “It’s all made up,” he likes to tell people, especially after the third beer.Aside from here on Goodreads, Mr. Cole can be reached at kevincole.bgd@gmail.com. He promises not to push his book on you.
Connect:
https://www.goodreads.com/author/show/8178750.Kevin_Cole?from_search=true
http://daysofthrobbinggristle.tumblr.com/blurb
https://twitter.com/GrippingThistle
1.  What inspired you to write Days of Throbbing Gristle?
I had a rotten adolescence back in the dark ages, the 1980s. DOTG was my attempt to make sense of it all. It was therapy. Or revenge.
2.  Have you ever wanted to write in a different genre?
I have some pretensions towards historical fiction. Oddly enough, I market DOTG as a YA novel, but it’s not really for teens. At least not normal teens.
3.  Are you a reader as well as a writer?  If so, any favorite books?
I hope all writers are readers! Two of my favorite novels are Myra Breckinridge by Gore Vidal and Catcher in the Rye by (who else) J.D. Salinger. I like to think DOTG is a unique combination of those two unique voices.
4.  Did you plan out the ending of the book or did you just roll with it?
I did plan it out. I don’t regret it. Yet I admit when I read it the final time, I was shocked by myself.
5.  How would you describe Days of Throbbing Gristle in 5 words or less?
A disturbing journey, with laughs.
6.  If you couldn’t be an author, what would you want to do?
I teach English here in Belgrade, Serbia. I love languages and in another life, I’d be a linguist.
7.  Do you have to write in silence?
Yes. Il silenzio e il mio amico.
8.  How long did it take for you to write Days of Throbbing Gristle?
I wrote the first draft in 1996. I finished the last last year. In between, a lot of life happened.
9.  Is there another book on the horizon that you’re working on?
There is, but knowing the way I write, who knows when it’ll be finished. Fortunately, writing pays well.
10.  Any advice for aspiring writers?
“Write what you know” is the worst advice ever. As my own model inspired me, write what you think, suspect, invent. Writing what you know is for people who shouldn’t write at all. Also, never underestimate the power of the day job.
Quotes:
“I mean, you just don’t see things like that in Pitsmoor, let alone wide open spaces this wide and open.  For the first time in my life, I felt tiny.”