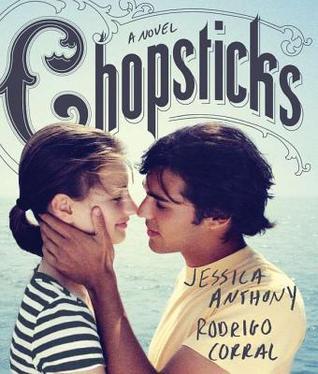 Amazon  Goodreads  Book Depository  Barnes and Noble
Goodreads Blurb:
“After her mother died, Glory retreated into herself and her music. Her single father raised her as a piano prodigy, with a rigid schedule and the goal of playing sold-out shows across the globe. Now, as a teenager, Glory has disappeared. As we flash back to the events leading up to her disappearance, we see a girl on the precipice of disaster. Brilliant and lonely, Glory is drawn to an artistic new boy, Frank, who moves in next door. The farther she falls, the deeper she spirals into madness. Before long, Glory is unable to play anything but the song “Chopsticks.”

But nothing is what it seems, and Glory’s reality is not reality at all. In this stunningly moving novel told in photographs, pictures, and words, it’s up to the reader to decide what is real, what is imagined, and what has been madness all along….”

Review:
Thank you to Lauren at Always Me for the giveaway (I won this book)!
When I picked this book up, I had no idea what to expect.  It turned out to be a bit like a young adult picture book.  There were almost no words and everything was told in pictures.
I can really appreciate the work that went into this book – it must have taken forever to get just the right pictures to say exactly what it needed to say!
I actually don’t really have much to say… I mean, I read it in half an hour if that tells you anything.  This is one of those books you pick up when you need a quick story to energize you or get you thinking about things.  Because while you’re reading this. you really do have to think.  It’s not some easy peasy lemon squeezy picture book where everything is spelled out for you.  Every picture has a meaning beyond the meaning and connects to everything.
I really did like the plot.  It was so different and unique!  I almost wish it was an actual written book so I’d have more time with the main characters.  You don’t get to know them all that much but I think that’s the point.  Because everything is told in notes or pictures, it’s from an outsider’s POV (possibly the dad’s) so that fits.
The Final Verdict:
A good, dark, hopeful, contemporary.  I read it in 30 minutes but it didn’t let me go in that time frame.  The plot was very good as were the characters.  I’m not sure how much I liked the outsider POV but it was definitely different.
4 stars
Quotes:
“Love is wild and when it is cut returns again, stronger whether you want it to or not.”